In the Spring of 568, Alboin led the Langobards to the invasion of Italy. They occupied Friuli and then spread across most of the country, establishing an independent kingdom which contrasted the Byzantine rule. Plagued and famined, the population offered little to no resistance.

Thanks to their powerful fleet, the Byzantine maintained the coastal rule and remained in control of Southern Italy, the peninsula was thus divided into two.

The North was under the Langobards, save for the coastal areas of Liguria and Veneto. The duchies of Spoleto and Benevento originated in the centre and in the South.

The exact founding date of the duchy of Spoleto is unknown; the only Longobard source on the early Longobard period, Paul the Deacon’s Historia Langobardorum only shares vague information while hinting at Spoleto’s and Benevento’s fame.

Modern historiography tends to hold the Langobard rule across central Italy be not the result of a mere Langobard invasion by king Alboin’s troops, rather it was the outcome of Langobard mercenaries who had previously been in the Byzantine army and, during the Gothic War, had been used in central Italy.

In 575 the Byzantines tried to recover the peninsula by importing other Langobard mercenaries from Syria.

Among these, under general Baduarius, there was Faroald I. Animated by a desire for greater autonomy, he rose up against the Byzantines and headed his troops toward the very rich city of Classe, an important sea port on the Adriatic.

The move proved unsuccessful, so they retreated to central Italy, where they established the duchy of Spoleto, presumably in 575 or 576, that Alboin ruled with the title of duke till his death in 591.

The choice of Spoleto can be linked on the one hand to the nature of the place, which offered Faroald I a defensive bulwark against possible attacks by the Byzantines, on the other hand to political reasons. 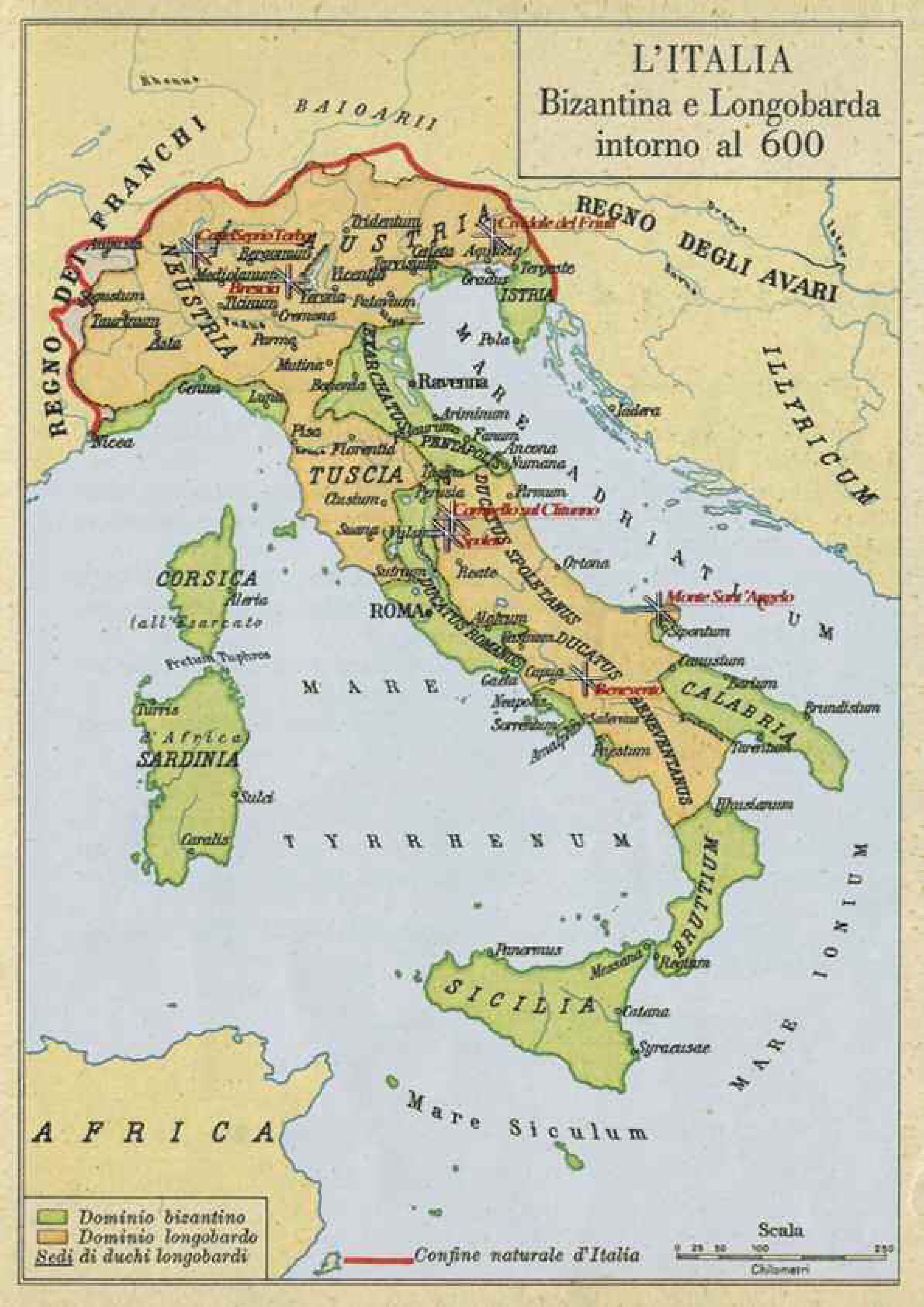 This is the Period of the Dukes (a.k.a. the Period of Anarchy), a decade of interregnum between 574 (death of Clefi) and 584 (election of Authari), during which the Langobard kingdom of Italy did not have a sovereign, but was governed in a collegial manner by the various Langobard dukes, independent of each other.

The Dukes of Spoleto always enjoyed a matter-of-factly, strong autonomy from the politics of the Langobard kings or from the central power, even after the end of the Period of the Dukes and the restoration of a central royal authority with Authari in 584.

The invasion of our territory seems not to have been particularly fierce; Spoleto, a city destined to become one of the bastions of the Longobard power, was spared the worse by Faroald I.

Many and important were his exploits. He conquered vast territories, or simple strongholds, in the Piceno, Sannio and southern Umbria and went as far as under the walls of the city of Rome. In fact in 578 Pelagius II was consecrated pope without imperial confirmation because the city was besieged by the Longobards.

In 579 he reached Ravenna to occupy the territory of Classe.

«In this period, Faroald, first duke of the Spoletans, invaded Classe with an army of Longobards and left the opulent city naked, stripped of all its riches.» (Paul the Deacon, Historia Langobardorum, III, 13).

In 581 he invaded the Greek possessions in the South.

During the interregnum, the Duke of Spoleto alone did more endeavours than all the others put together (Balbo, History of Italy).

The Duchy of Spoleto long outlived the Longobard Kingdom, which fell in 774, passing under the Franks first and of the States of the Church after, till 1198. Along with the Duchy of Benevento, it was known as the Langobardia Minor.

The strategic-military importance of the Duchy of Spoleto with its ten gastaldati is therefore evident:

Its overall population, according to some historians, was around one hundred thousand inhabitants in the 10th century, and its surface area was about 5000 square kilometers.

Have a good week start with the Langobards!