It has been defined a masterpiece of engineering, bold and ingenious in its conception and execution, an electric traction railway that from 1926 to 1968 managed to connect various localities of the Valnerina along the route between Spoleto and Norcia, despite the roughness of the landscape. The former railway is now one of the most suggestive cycle and trekking paths in Italy, recently included by the Touring Club among the places not to be missed in Umbria.

Thanks to the Messaggero collection of pages on local news preserved at the Carducci Library, it is possible to get to know some of the characters who were among the protagonists of the enterprise and trace some stages from 1910 to the inauguration of 1926, that led to the realization of this impressive work.

The first two articles are a first is a letter from the then mayor of Spoleto, Mr. Paletti, and the second is a communication from the Spoleto-Norcia pro railway committee; they date back to February 1910 and are particularly interesting because they both underline how the ambitious project by the civil engineer Carlo Carosso was conceived as a strategic communication route between Umbria and Piceno, to break the isolation of the territories by opening new commercial and development prospects. This is also well explained in an interview, dated 12 May 1910, with one of the most active supporters of the company, Domenico Arcangeli, MP from Spoleto.

A few years go by and the project changes. The article of 20 August 1913 gives a detailed summary of the technical report provided to the “Messaggero” by the Società Subalpina di Imprese Ferroviarie which is entrusted with the work to be carried out on a new design by Eng. Erwin Thomann. It contains the description of the route, the stops, the altimetric and planimetric details and the estimate of costs. Thirty months of work are required for an amount of almost 12.5 million lire. On 14 September of that year the first pickaxe was announced, in the locality of Licina, but the work was immediately interrupted for many months due to the difficulties of the Sutter company. 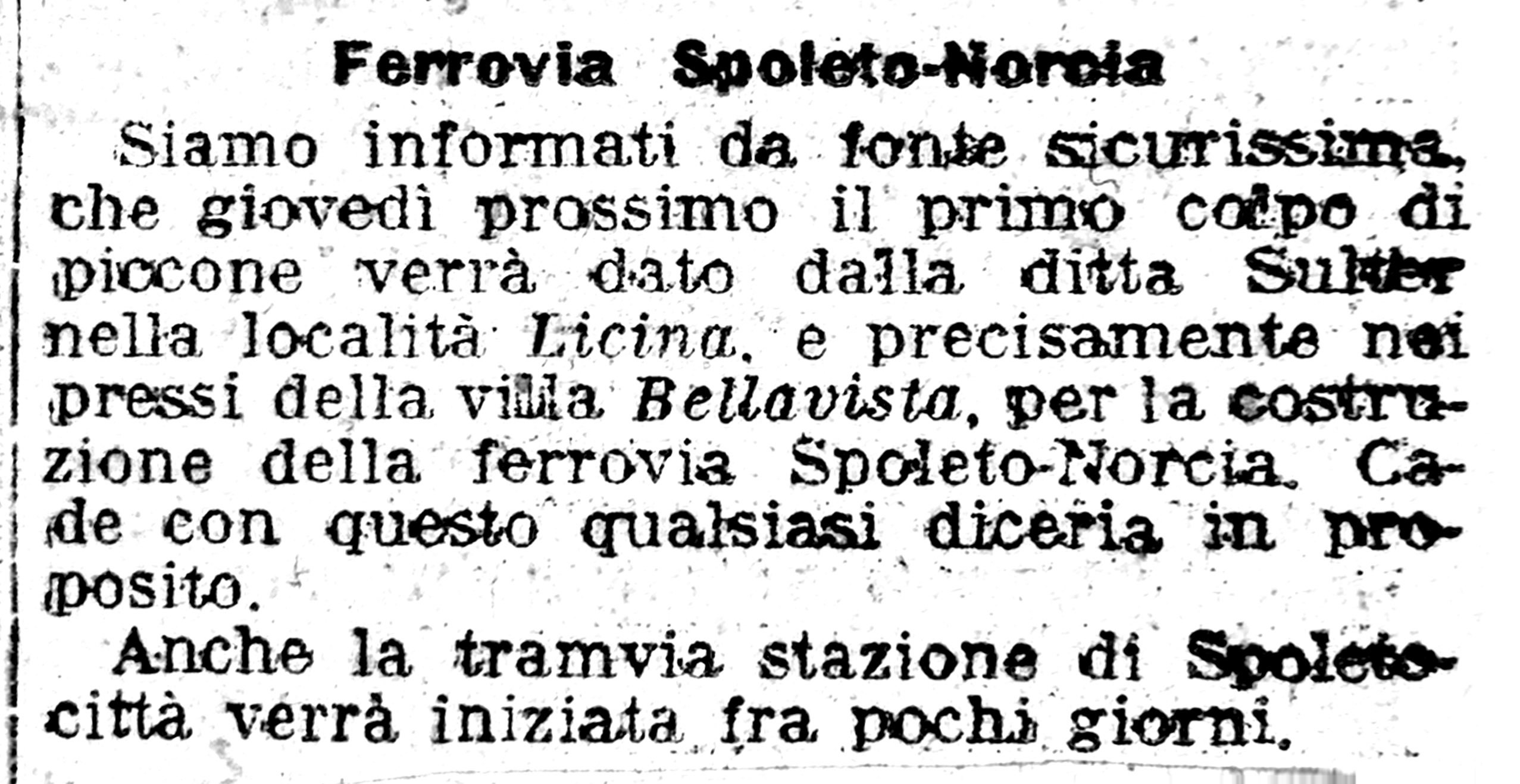 On April 9, 1914 MP Carlo Schanzer sends a telegram to the mayor of Spoleto Fratellini: between April 16 and 20 work can resume. Thomann grants an interview in which he gives all the details. 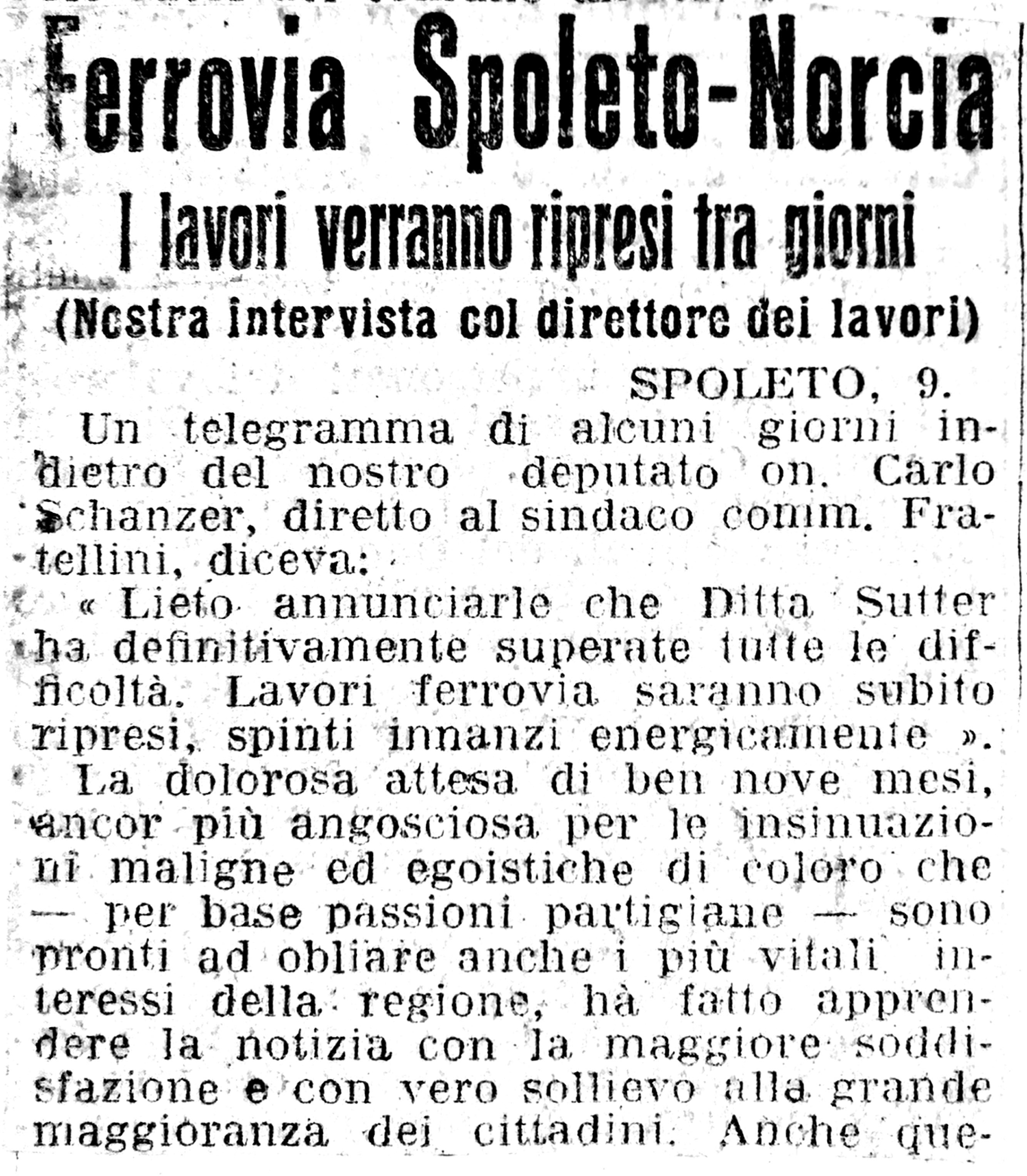 Despite the raging war, the work continues. On May 12, 1916 the Spoleto press was invited to inspect closely the progress of the work. The Caprareccia tunnel was dug for 680 metres, the Cortaccione bridge has already been completed.

But the growing conflict and its virulence imposed continuous and prolonged interruptions, even though the Caprareccia tunnel was completed in April 1917. On February 21, 1921, the Spoleto-Norcia gallery was again discussed after work resumed in 1920. In those days the helical tunnels, one of the wonders of the railway route, were being completed. 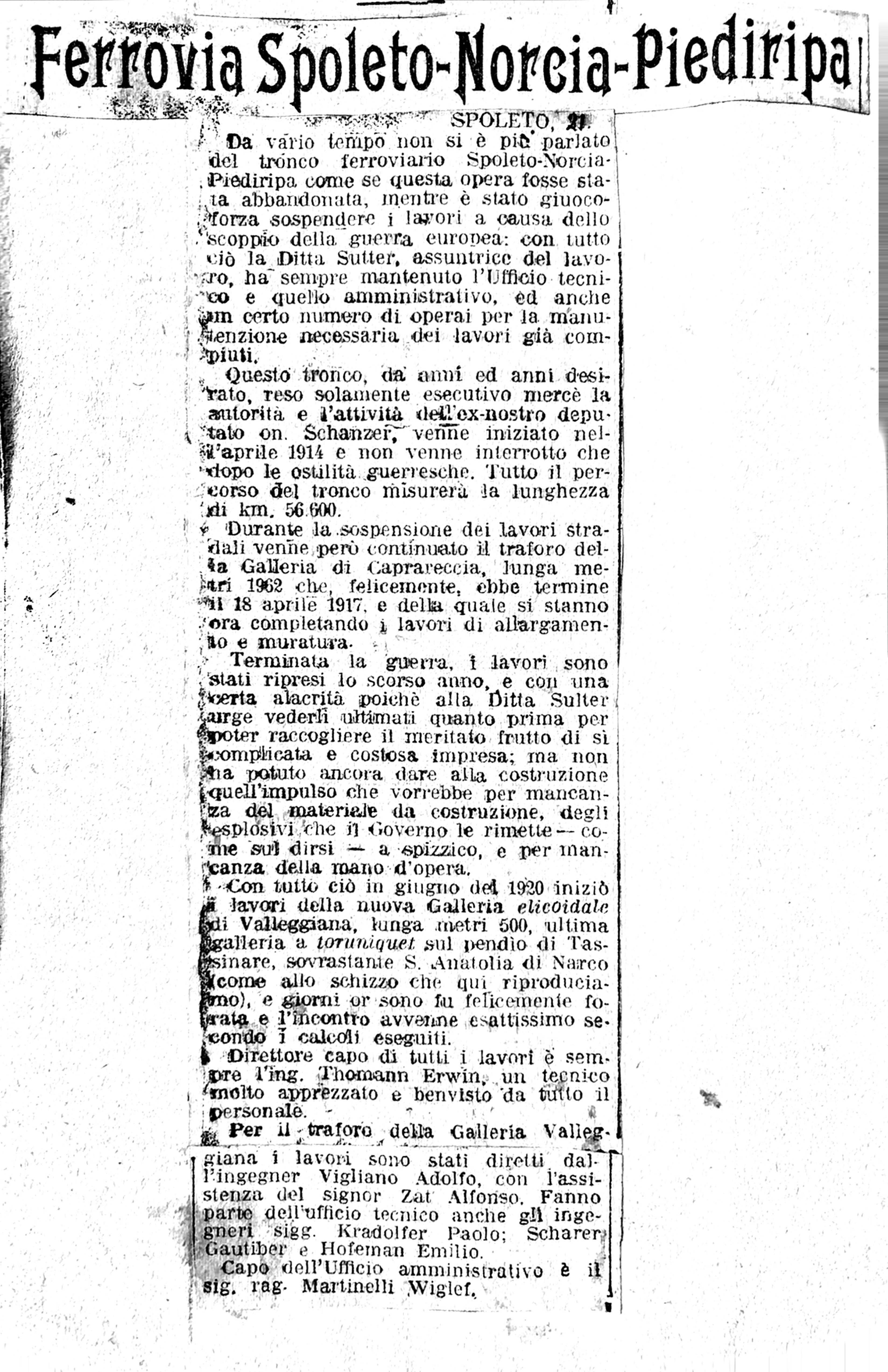 A few days before November 17, 1923, Chief Inspector of the Royal Railway Inspectorate, Eng. Massioli visits the track, to present the progress report to the Superior Council of Public Works. Accompanied by the Director General Thomann and the works directors Hoffman and Basler, Massioli, who is informed that the works are complete for almost two thirds of the line, remains “enraptured by the genius of the railway construction and the beauty of the landscape”. 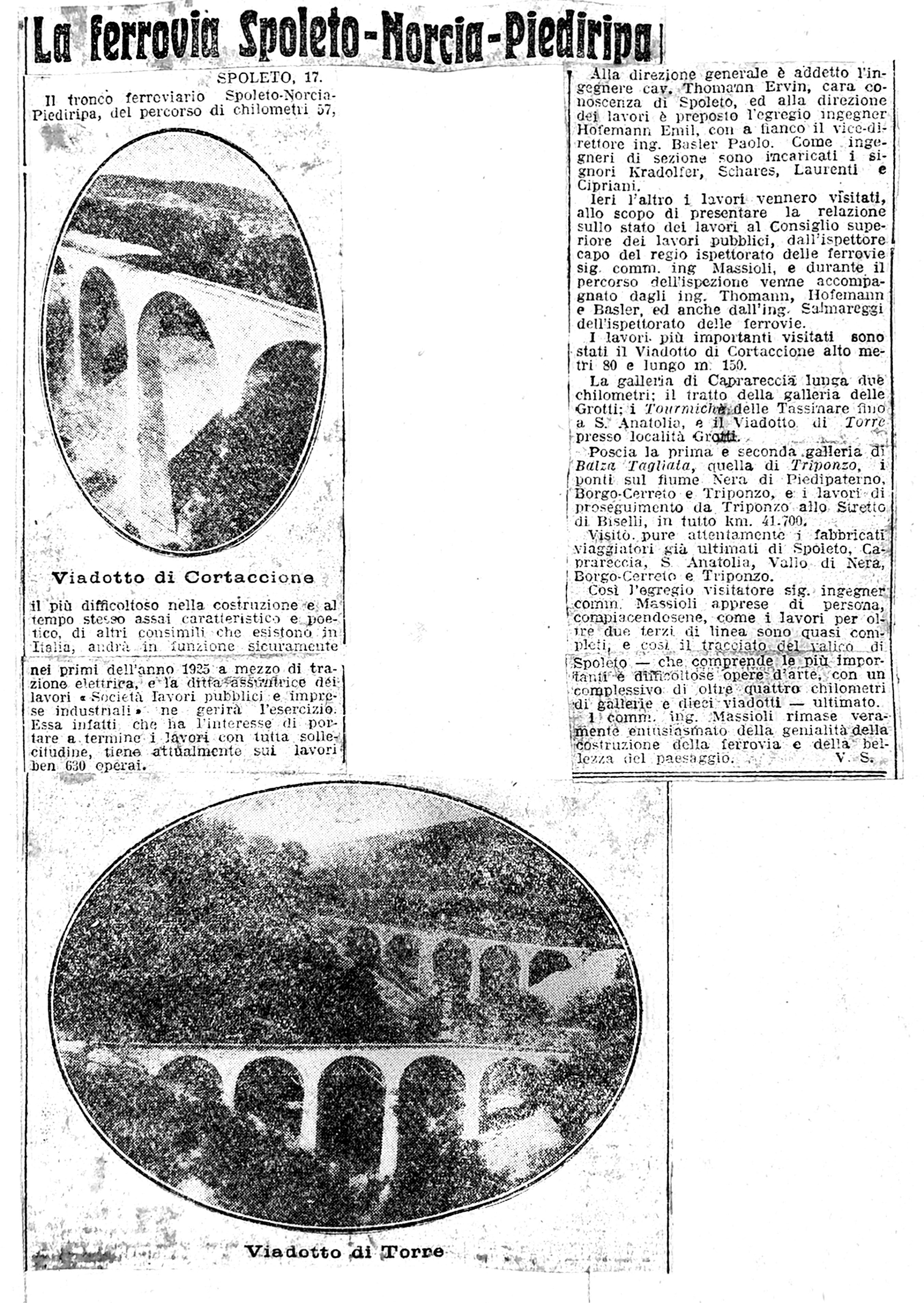 It’s finally time to celebrate. After the last tests (article of September 1926) and a letter from the mayors of Spoleto and Norcia, Ferretti and Cammeresi, announcing the next inauguration of the Railway (piece published on October 29, 1926), an undated article, but always referable to October 1926, recalls the protagonists and lists the numbers and the main events of a real enterprise. 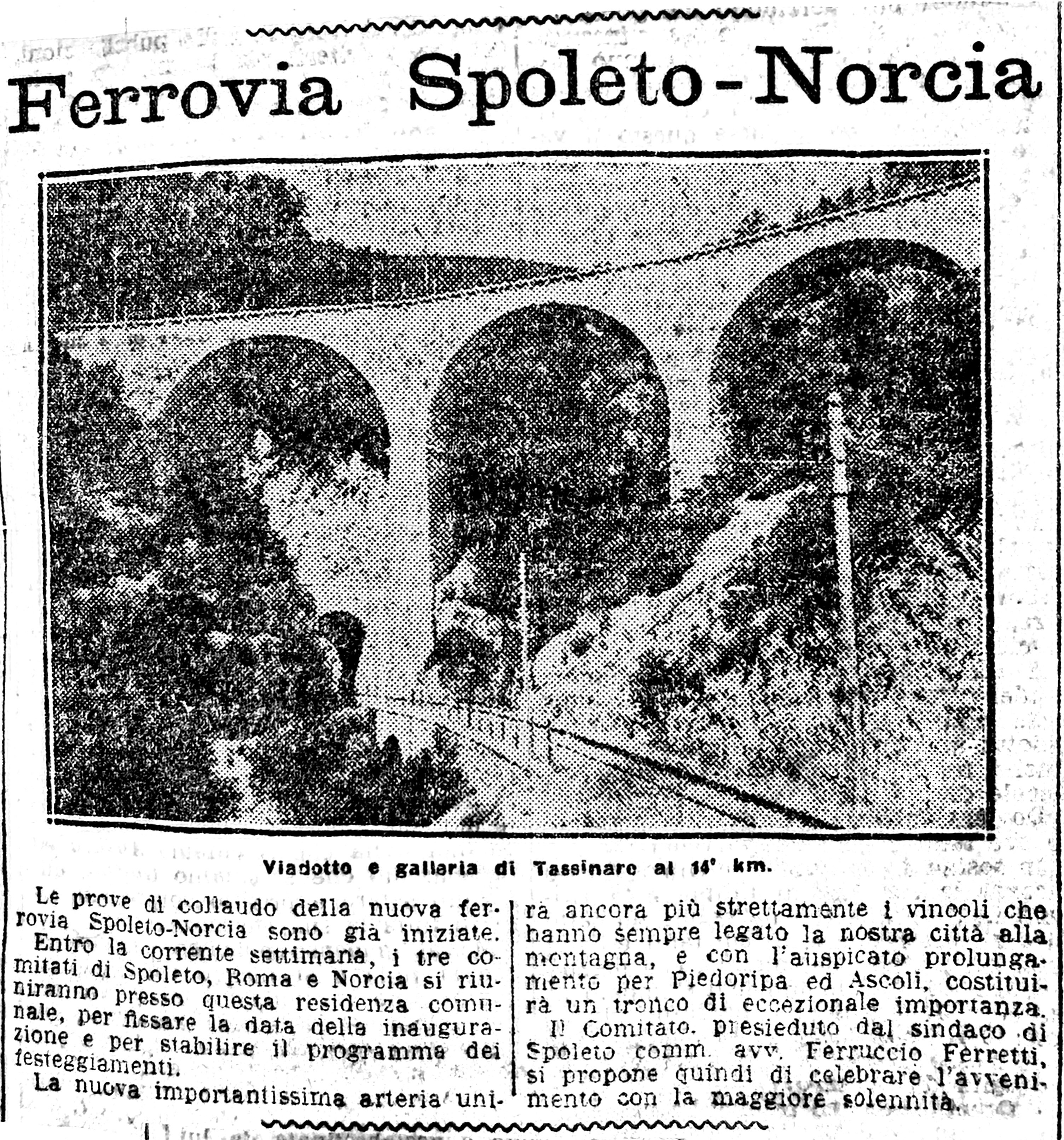 The head of the government Benito Mussolini, after a long and cordial conversation with the mayors of Spoleto and Norcia, sets the date for the inauguration ceremony on Monday 1 November 1926, attended by ministers and undersecretaries. The chronicle of that day, the story of the train’s journey, the various stages of the ceremony, the speeches, the festivities, in an atmosphere of pomp and ceremony, are contained in the article of the “Messaggero” of 2 November that closes our anthology. 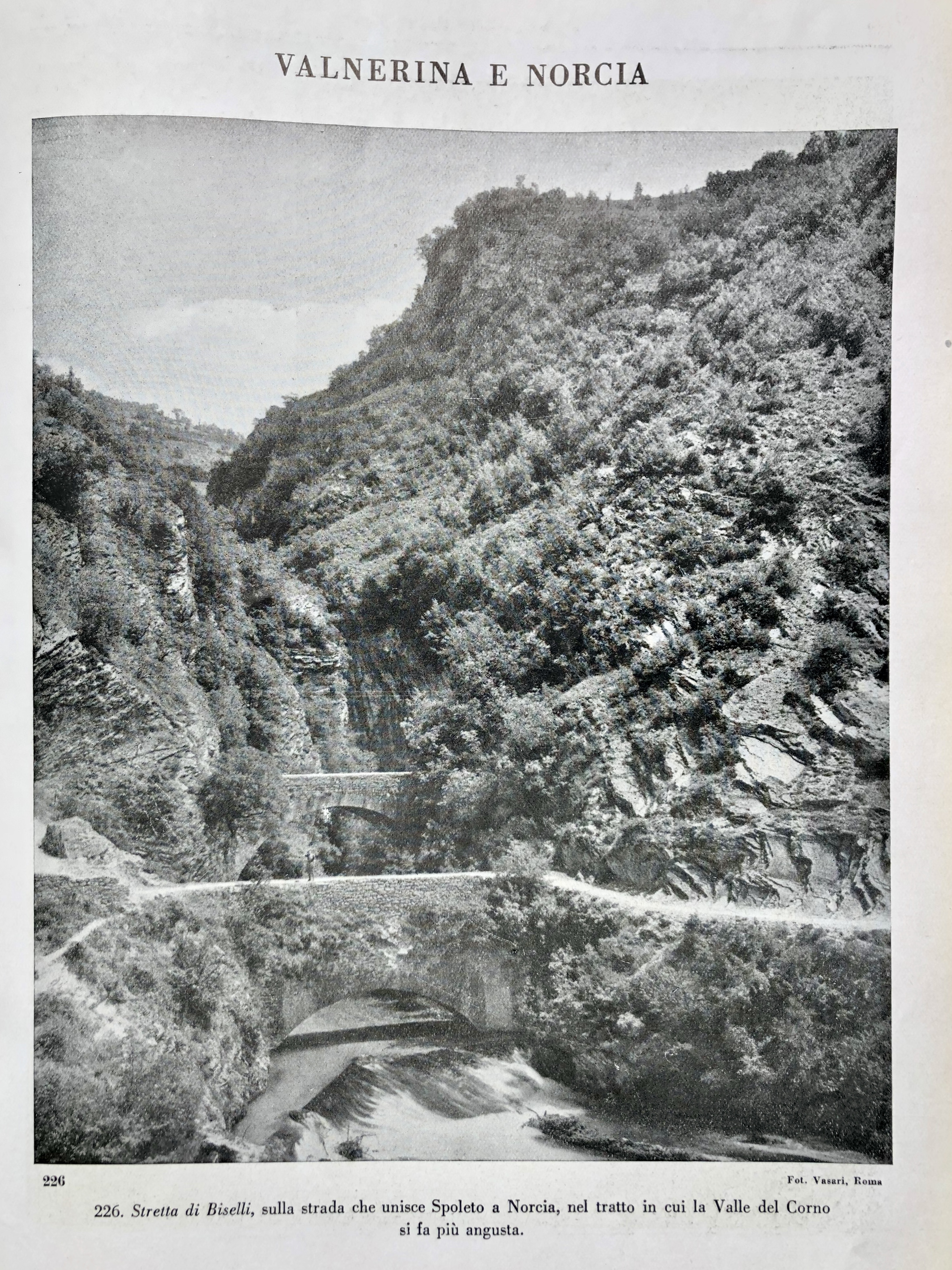