December, 1928: Following a meeting of the residents of the Teatro Caio Melisso, presided over by the deputy podestà of Spoleto, it was decided to equip the oldest theatre in the city with a “radiator heating system” and to proceed with other “necessary restorations” so that the theatre “can function in any season”.

This is what appeared among the curiosities and minute facts of the city chronicle in the issue of 15 December 1928 of the weekly magazine L’Alta Spoleto, which followed the story of the works and gave space to it in various issues of the publication. Obscured by the magnificent Teatro Nuovo, the city’s greatest temple for entertainment since 1864, the Teatro Caio Melisso was suffering from functional inefficiencies that compromised its use and had to be promptly fixed. 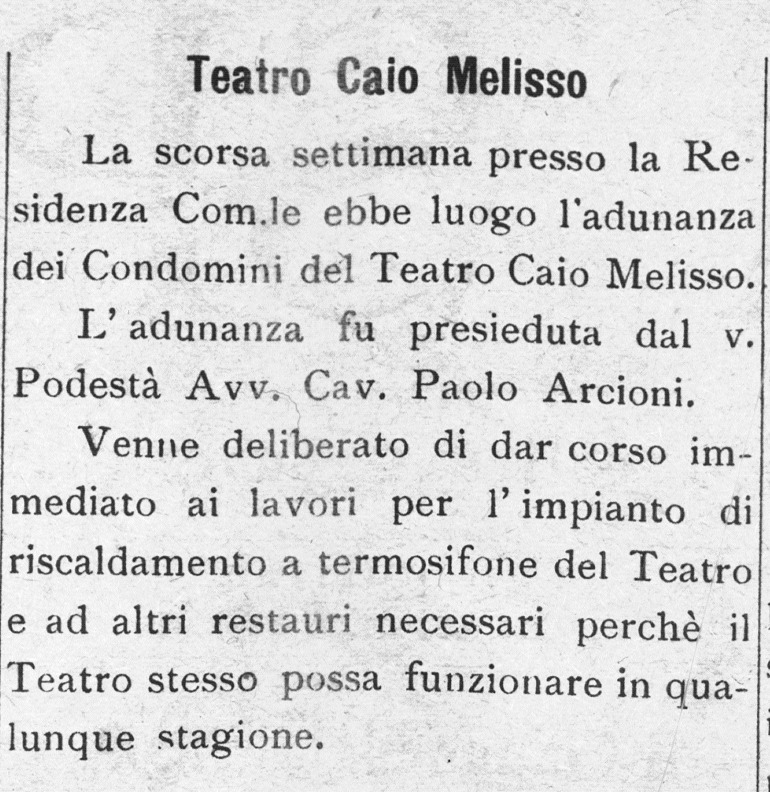 Begun in January 1929, the work for the installation of a heating system was already finished and tested a few months later (see issue of April 13, 1929) and the cost faced by the City was 35,586 lire (issue of June 15). After the works’ completion, on August 31 the newspaper hopes that the Provincial Commission will give the placet for a prompt resumption of the activities. On September 28 it is announced that the theatre will host a singular event on October 2: a meeting of Greek-Roman wrestling. The November 23 issue explains in more detail the general arrangement of the structure, not limited to the heating system since the theatre had also “renewed the electrical system, the dressing rooms and restored the stage”. This 1929 restoration was not a structural intervention in the strict sense of the word but rather a series of operations of improvement and adaptation; so much so that these works are mentioned very rarely in books and specialized magazines that have focused on the history of the theatre.

The long and glorious history of the city’s oldest theatre began in the second half of the 17th century, when a “room for public comedies”, by initiative of the Accademia degli Ottusi, was created in the vast space left of the church of the Manna d’Oro, above the structures of the unfinished Palazzo della Signoria. It was then called “Noble Theatre” and in 1668 it had become, with the creation of four tiers of boxes, one of the first examples of Italian theatre. Over time, the theatre has undergone various alterations and restorations. The most famous are those of 1874, 1958 and 2011.

In 1874, Giovanni Montiroli from Spoleto was entrusted with an ambitious restoration project. Montiroli was an architect who had studied under Luigi Canina and had prestigious international clients, especially in England; after his intervention, in 1880 he returned a completely renovated theatre to his city, thanks to the correction of the horseshoe bend of the plant to improve the visibility of the stage, the replacement of the old wooden structure of the boxes with a masonry work, the creation of the foyer and the bar and a new decorative layout by Domenico Bruschi, who painted, among other things, the curtain dedicated to Caius Melissus, a freedman born in Spoleto , writer, playwright and grammarian, who had become Emperor Augustus’ trusted librarian. It is after Caius Melissus that the theatre is named. The original studies and drawings of Montiroli’s project, of splendid clarity and precision, are kept at the City Library. 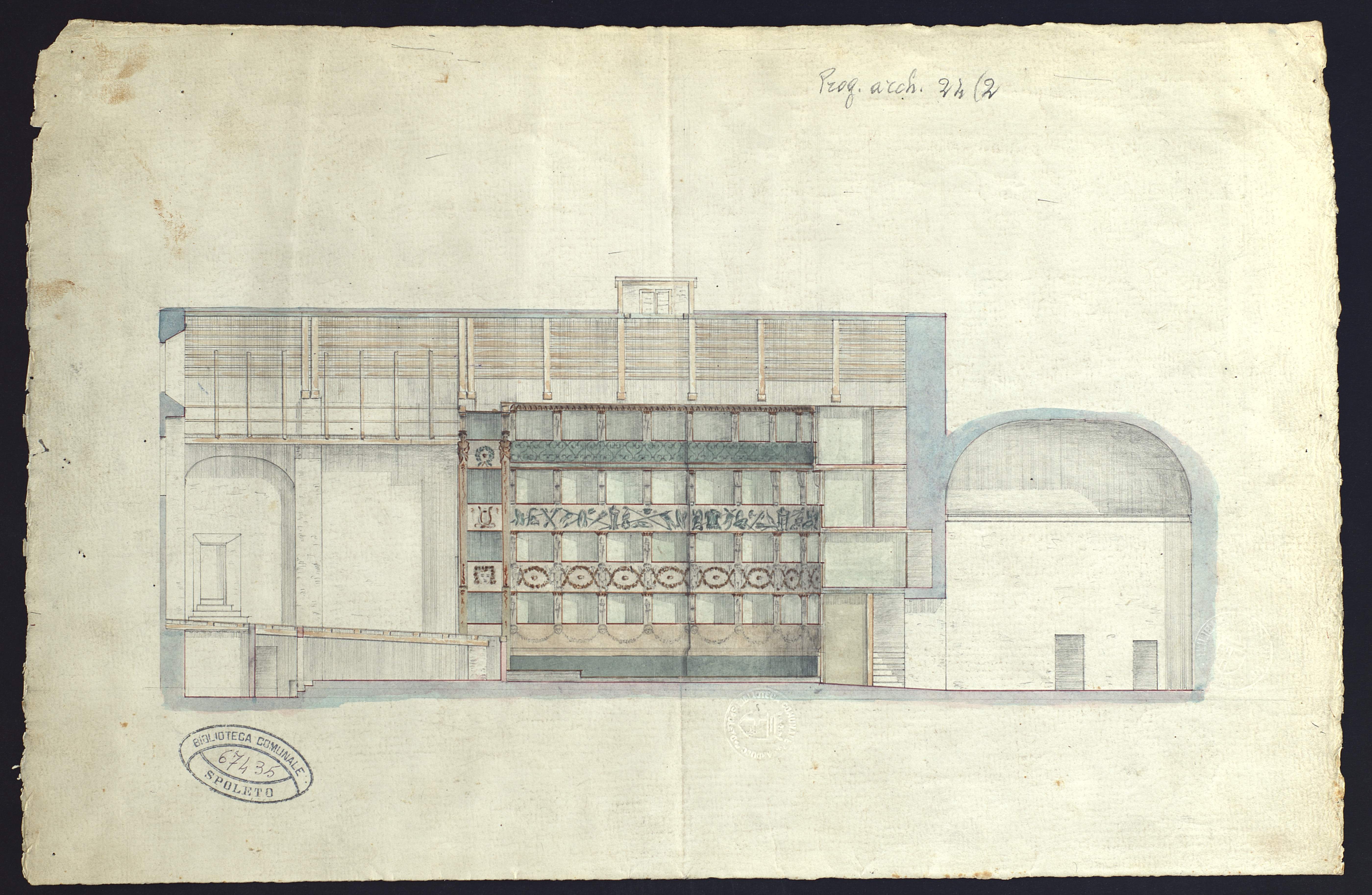 Another major restoration occurred in 1958, marking a return to theatrical life after a long period in which it had worked mainly as a cinema. During what was the first year of the Festival of Two Worlds, the architect Roberto De Luca was responsible for the renovation of the building through the decoration and arrangement of the entrance, the restoration of the decorative parts, the replacement of the wooden stage with an iron structure, the enlargement of the orchestra pit, the remaking of the dressing rooms, the opening of the panoramic loggia towards Piazza della Signoria in the foyer and the staircase to the former civic museum. In December 1958, the magazine Spoletium hosted an intervention by De Luca himself, accompanied by a suggestive photographic apparatus. 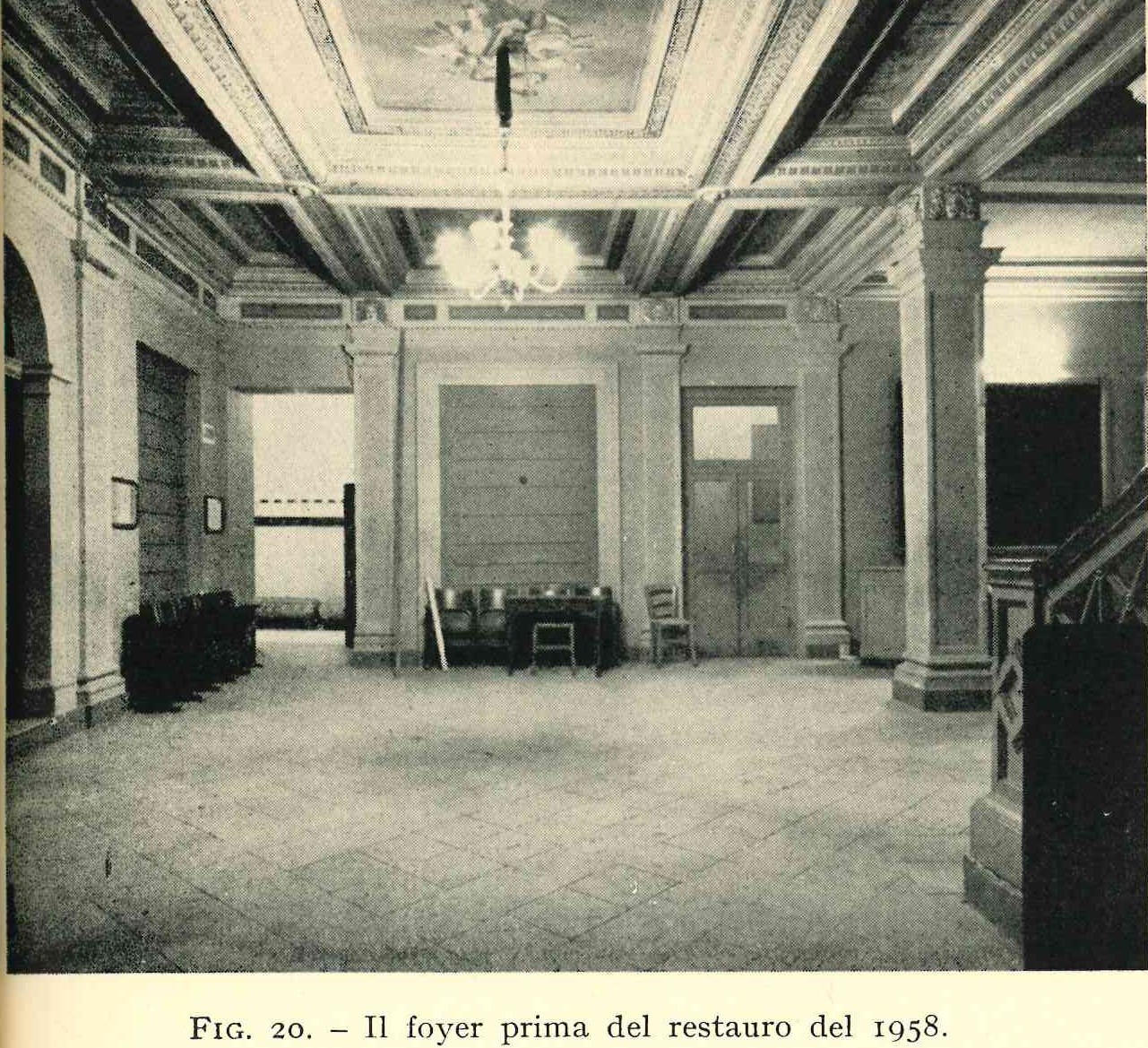 Other works would follow, in the 1980s and 1990s, but the last major intervention would take place from 2011 to 2015; they included architectural and plant restoration, as well as safety and functional adaptation of the building by the Carla Fendi Foundation, with the theatre being renamed Teatro Caio Melisso – Spazio Carla Fendi.