On 22 August 1910, the Museo Civico di Spoleto was inaugurated in the Palazzo della Signoria in front of a cheering crowd and numerous dignitaries. It was the first museum in the city in the proper sense of the word, with a nucleus of works and exhibits that are now mainly housed in the National Archaeological Museum and the National Museum of the Duchy at the Rocca Albornoziana.

The city’s long cherished dream of having a consistent collection of archaeological, epigraphic and historical material housed in an evocative, prestigious setting was thus realised. At the same time, the dream of Giuseppe Sordini, eminent scholar and archaeologist from Spoleto, deus ex machina of historical research on the city, was realised. He had worked tirelessly to finally create a space to protect and fully enhance what was an assortment of valuable materials and pieces, scattered between the Town Hall, the headquarters of the Accademia di Spoleto and various private homes. That space, the chronicles report, of “severe beauty“, had been restored “at great expense by the City (i.e. thanks to Spoleto’s forces alone)“.

At least since the last twenty years of the 19th century, and more systematically since 1903, the year in which Sordini restored Palazzo della Signoria, the archaeologist from Spoleto had been working tirelessly and rigorously to collect and arrange a heritage of works of art and evidence of the past, much of which he himself had helped to discover. The Civic Museum was perhaps the greatest undertaking of Sordini’s life, a project on which he continued to work until the year of his death in 1914. At the time of its inauguration, the museum occupied “a large room with two naves, about 50 metres long, with beautiful windows overlooking the Spoleto valley, plus two other smaller rooms towards the entrance. It was absolutely impossible to find a more suitable, dignified seat for the rich furnishings of the Museum than this one, and certainly no other part of Umbria has the same“. The grandiose and never completed Palazzo della Signoria housing the museum, deserves some mention. Sordini moved the museum collections to the first floor of the 14th-century building that was to rise above the level of Piazza Duomo and was never completed. Since the 15th century, the unfinished structure has acted as a substructure for some of the buildings in the square such as the Caio Melisso Theatre and the Church of the Golden Manna. Shortly before being used as a museum in 1860, the first floor was seriously altered to house a judicial prison. 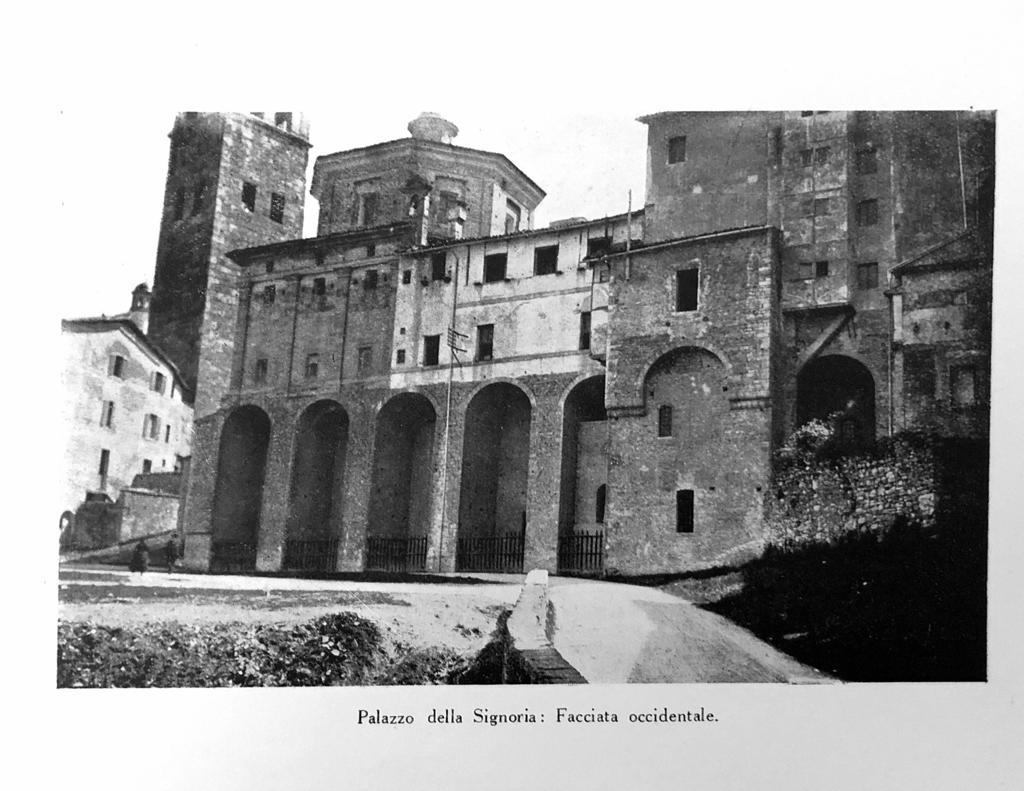 The museum’s inauguration ceremony and its special atmosphere were the subject of articles in both the local chronicle of the ‘Messaggero’ and the weekly ‘La Giovane Umbria’ kept at the ‘Carducci’ library. These were festive days in Spoleto for the Congress of the Regia Deputazione di Storia Patria dell’Umbria (Royal Deputation of the History of Umbria) and for the many other initiatives that were being prepared for the 50th anniversary of the annexation of Spoleto to the Kingdom of Italy. Il Messaggero recounts that “when Cav. Sordini, who was the tenacious creator and organiser of this wonderful place, arrived, he was met with a warm demonstration“. Sordini “was repeatedly forced to interrupt his speech, overcome with emotion, especially when he mentioned the work he had done over many years to reach and expose this place of veneration to the admiration of scholars and scientists, fighting against scepticism, contempt and disregard“. “La Giovane Umbria” underlines how “in those marvellous arches on which the sun rained with reflections of ancient gold and the light of the electric bulbs spread warmly and harmoniously, in those arches – memories of times that were, of struggles and tears, all that is fine, cultured and elegant in Spoleto had come together“.

In 1928 the Accademia Spoletina published an illustrated catalogue of the Museo Civico, from which the pictures in this article have been taken.