From the point of view of sporting clamour and competitive fervour, the two-year period 1947-48 was particularly intense and happy for Spoleto, at least judging by the numerous snapshots and suggestive images – dedicated to great sporting events – preserved in a precious photographic album kept in the City Library. From the football exploits of Virtus (which we have already documented in this column), to the passage of the Giro d’Italia, to the athletics competitions, there are many occasions worthy of recounting, of which we will have the opportunity to speak in the future.

Particularly eye-catching are the images immortalising the start and the various phases of the Spoleto Motorcycle Circuit, a motoring event that came into being in 1935 after about fifteen years of activity by its organiser, the Moto Club Spoleto, one of the city’s oldest, most prestigious sports associations. The shots, according to the old captions, refer to the second edition of the city circuit, held in 1947. 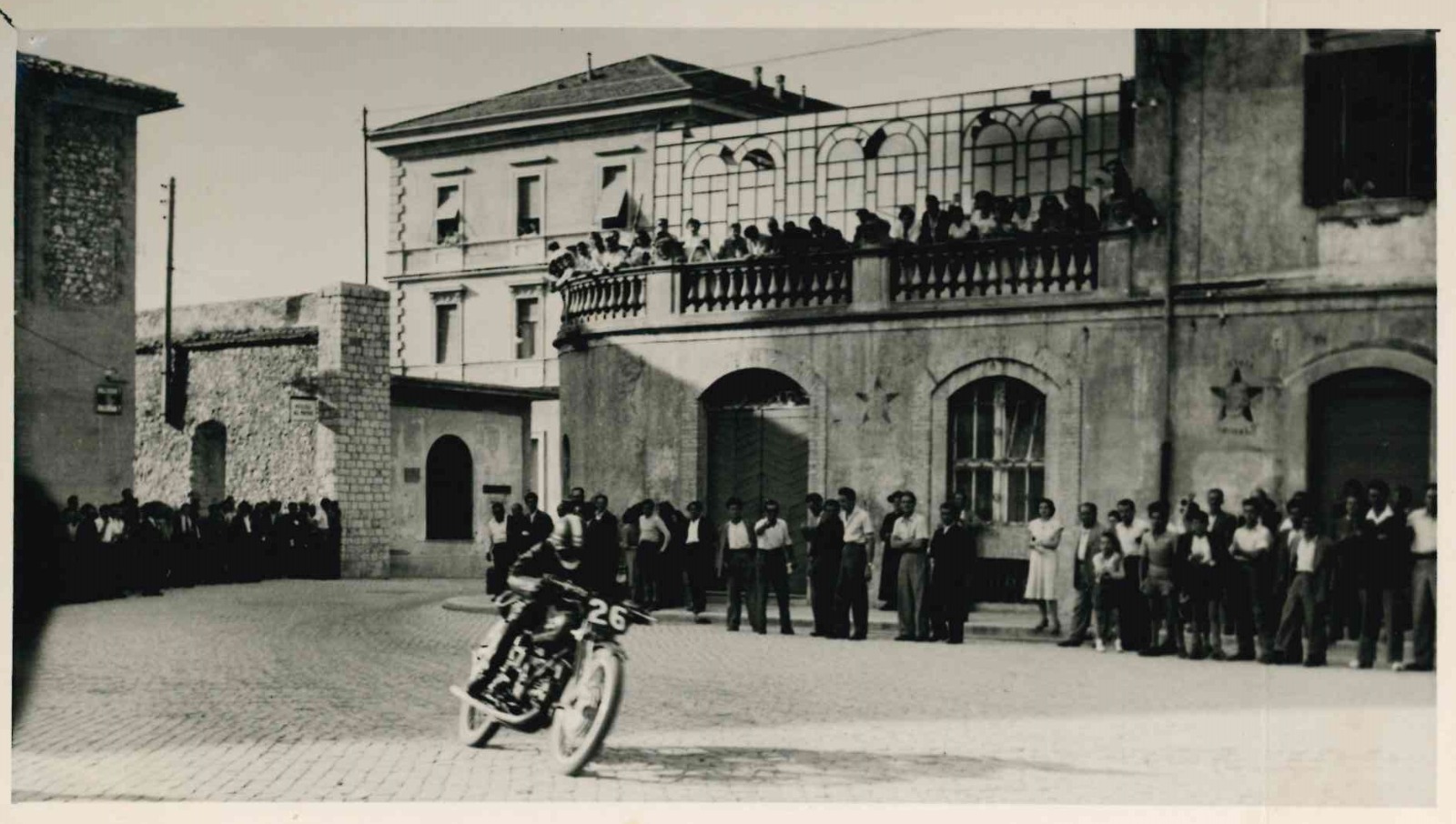 These captions risk being inaccurate because, compared to the publications, the roll of honour and the documents of the Moto Club, the 1947 edition was the third, after the debut in 1935 and after the repeat, a few years later, in 1939. After a long interruption due to the war, in 1947, in the 500 category, Libero Liberati from Terni triumphed, one of the heroes of Italian motorcycling, who would impose himself in Spoleto the following year and whose career would be destined to the greatest sporting glory with the victory of the MotoGP in the following decade. Remo Venturi, on the other hand, was still only a spectator, one of the most important personalities in the history of sport in Spoleto, whose motorcycling adventure began a few years later, at the beginning of the 1950s. Able to win five Italian titles and to come close to winning the MotoMondiale three times – with MV Augusta – at the end of the decade, Venturi, despite a few participations, will never be able to excel in the circuit of Spoleto. In the mid-1950s the Spoleto race became a valid stage for the Italian championships and continued to be an important street circuit until 1973, when the races in city circuits were abolished.

The Spoleto Motorcycle Circuit is just the tip of the iceberg of the conspicuous activity of the Moto Club Spoleto, which over the years has been able to produce riders who have achieved world-class results such as Max Biaggi or Simone Corsi, organise historic events such as the Spoleto-Monteluco uphill race, and successfully open up to new specialities. The experience will be repeated next September with the 2020 World Championship, on the eve of the 100th anniversary of the Moto Club, an anniversary that will fall in 2021 and for which a commemorative publication is being prepared.