Friday 29 October 1897: one of the first screenings of the cinematograph, the new technological stunt at the service of the storytelling through images that is astonishing the world, is held at the Teatro Caio Melisso. It is pointed out that the appointment is with the “Reale Cinematografo Lumiere”.

Sunday 12 October 1902. One of the first examples of motor vehicle service using steam vehicles in Italy was officially inaugurated, a link between the city and its mountainous areas, Norcia in particular.

Sunday 13 January 1907, at 11.30 o’ clock. Spoleto’s local public telephone service connects to the national line: for the mayor of Spoleto this is an important, long-awaited result that finally breaks the city’s isolation.

These are but a few examples of events and happenings in the social and cultural life of Spoleto that can be found among the thousands of facts and anecdotes contained in the “Catalogue of public posters as documents to the city chronicle”: it is a registry of notices, ordinances, ads, posters and various documentary material that in fact tells salient events and curious episodes in the city life in the period ranging from 1884 to 1921. 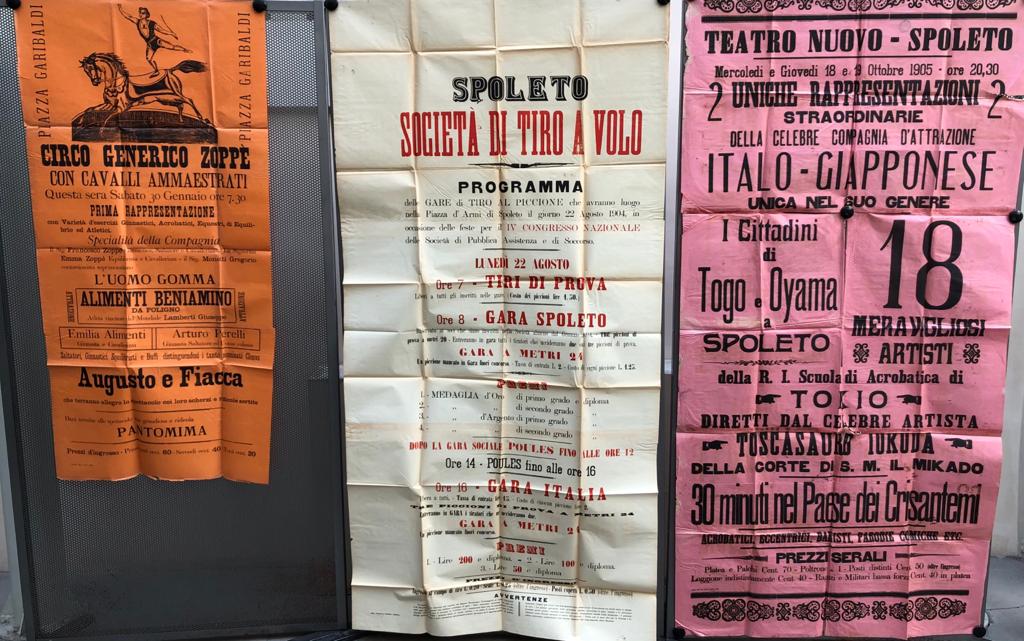 The long list features more than 1800 entries, and was for the most part meticulously drawn up and commented on by Rinaldo Gherghi, an important figure in the city’s cultural life, a figure whom Monsignor Luigi Fausti defines as “the true father of the library“.

Gherghi, a teacher of literature, directed the Spoleto City Library for 37 years, since its opening to the public in 1876. After his death in 1913, he was succeeded by his son Arnaldo, who continued the work of cataloguing posters started by his father.

Now these manuscript lists, kept at the Carducci Library at Palazzo Mauri, have been transcribed into computer documents so as to allow a quick and precise search, with cross-references to the remarkable things and the characters of the city’s history within the huge and precious mass of paper and typographical material kept in the archives of Palazzo Mauri.

An effective way to delve into the fragile sheets and ancient pages of those documents, discovering unusual details, evoking forgotten situations and characters, allowing links and suggestions that help to reconstruct part of the city’s identity itself.

On Saturday 26 September, on the occasion of the European Heritage Days, a selection of these posters and public notices will be exhibited to the public for the first time at Palazzo Mauri, from 9.00 to 13.00.