An epoch-making event, a memorable date, a new horizon, a new historical fact, a milestone towards progress: these are just some of the phrases used by the local newspapers of the time to welcome the news of the birth of the Spoleto Cotton Mill, a company hailed as a small miracle destined to transform and revolutionise the industrial and social profile of the city, inexorably pushing it towards modernity.

A quick glance at some pages of the “Giovane Umbria”, of the “Pensiero Radicale” and of the “Messaggero” is enough to notice the generous juxtaposition and the ampollary and emphatic tone with which this small, great epic is sung, magnifying the triumphant entrance of the industrial era in a town with a prestigious past but an uncertain and elusive present, still linked to an agricultural economy and therefore far from the entrepreneurial and technological enterprise of the nearest urban realities, which risk to strangle it.

We took a look at some newspapers of the time – kept at the City Library and covering a period from 1906 to 1908 – they tell the genesis of a story full of suggestions and emotions; a complex story, made up of exciting moments and painful discouragement, civil exaltation and bureaucratic fetters, heartfelt claims and proudly adverse positions; an event of more than a century ago which, even if relatively far away, still has strong reasons of interest and many influences on the present.

1906. Under the title “Un’ottima notizia” (Italian for “an excellent piece of news”), the “Il Pensiero Radicale” mag (“The Radical Thinking” of 1 March 1906 – after uncontrolled rumours and hearsay – gives reassurance that it is all true: a “large industrial plant of exceptional proportions” will be started in Spoleto, capable to ensure the coveted “economic transformation of the city”, and “ignite Spoleto’s economic and moral renewal”. It also discloses the enormous political and economic efforts that the then Mayor Arcangeli made to obtain the electricity needed for the new industry, purchasing a grinding wheel and a derivation channel for the production of electricity from the waters of the Velino at the expense of the City. “Il Messaggero” of 8 March confirms this, specifying that, having reached an agreement with the Administration, the owner of the cotton mill (a Lombard-Venetian joint-venture) undertakes to pay 40 thousand lire per year in rent and that work will begin by the first fortnight of the following May. 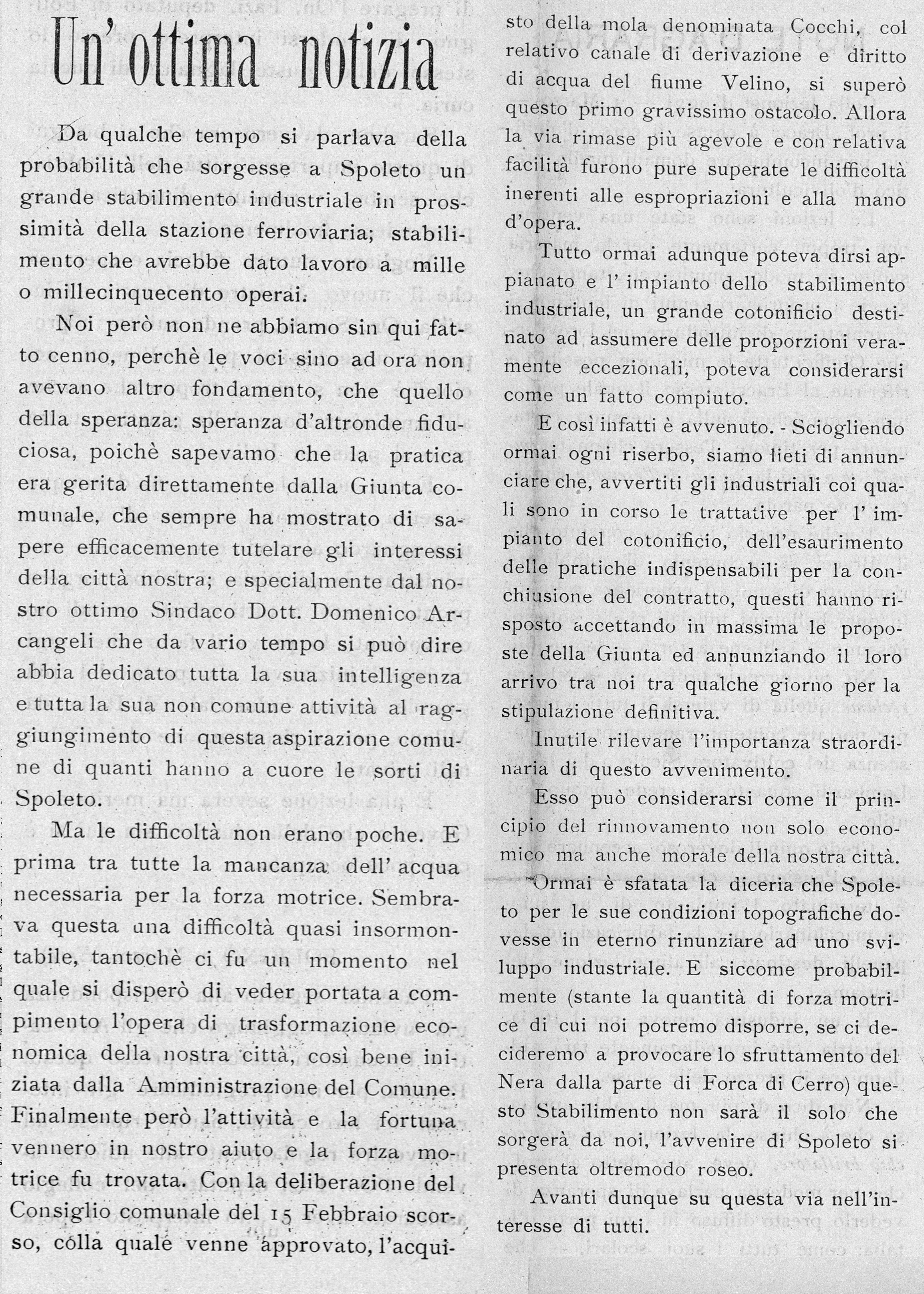 With no lesser emphasis “Il Pensiero Radicale” addresses the news and all its possible implications. The March 15 issue even talks about the city’s awakening and the opening of a new horizon to Spoleto’s vitality: “The erection of a great industrial plant in Spoleto, now that it can be spoken of aloud, is a milestone on the march towards progress: the breath of activity, of Milanese industry will produce beneficial effects in our valley: this is the lucky beginning of an intense and healthy new life. On the contrary, it can be said that the new industry will change the physiognomy of our city. And for good. We can already believe in a future working-class district along the station approach, a growing of houses till Piazza Garibaldi, which, once arranged and embellished, will become, for its topographical position, the link between the old city and the new one, the terminal of the upper city, of the countryside, and the main centre of the busier lower city”.

An extraordinary document is published on 20 June 1906 in the socialist periodical “La Giovane Umbria”: it is the report of the Council led by mayor Arcangeli and presented in the previous March to the Town Council. It recounts with generous abundance of details the whole process of an enterprise that is defined in no uncertain terms as “the greatest event in the city of Spoleto, after its liberation in 1860”. But far from being a technical-administrative report, obviously including all the details of the completion of the electrical system and the figures of the financial plan, the report is above all a precious testimony to the aspirations of the political class of a town of ancient prestige and lineage – whose decadence is underlined in several steps – and the trepidation of a community that aims to keep pace with progress and modernity. 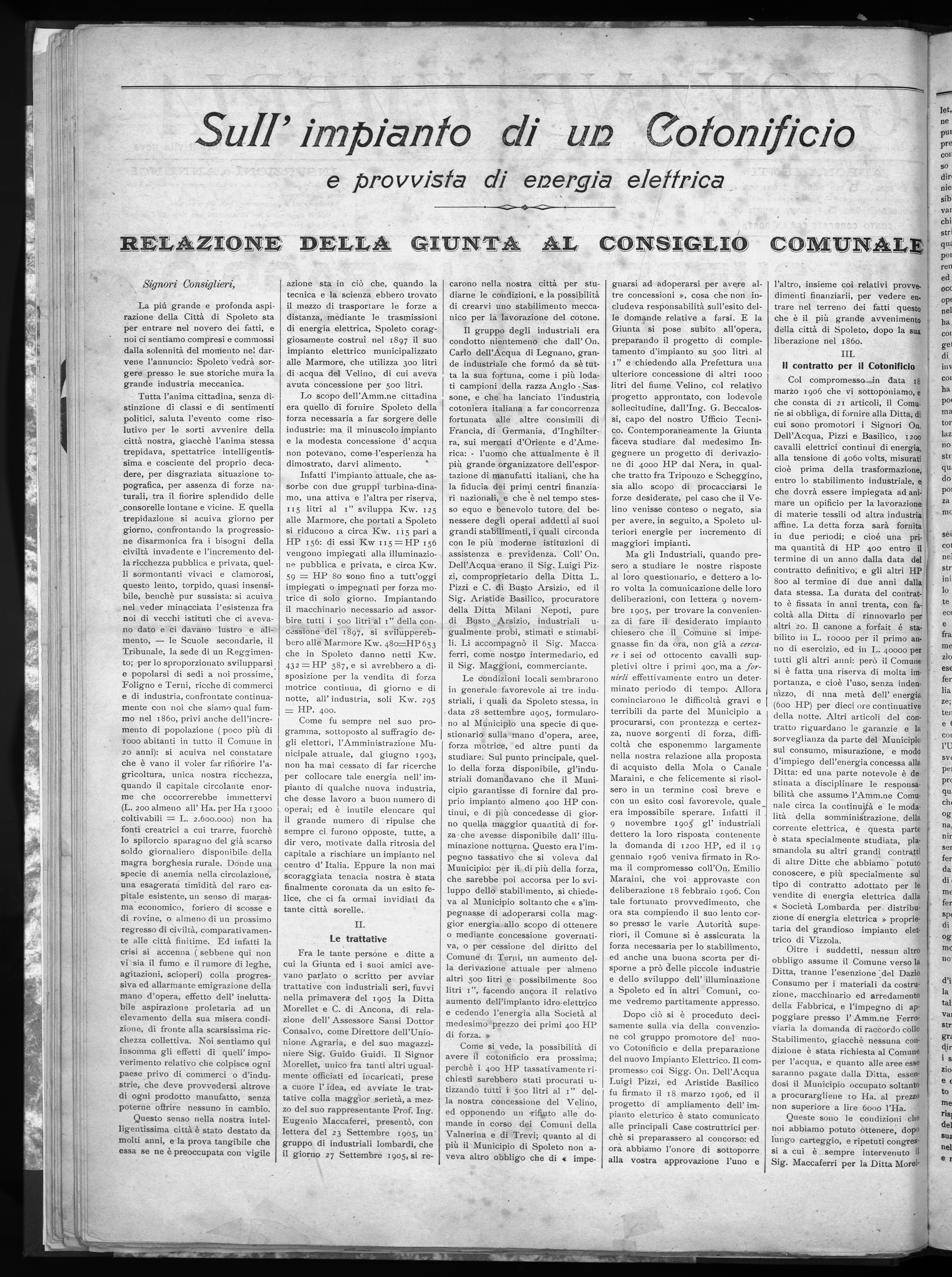 Time for some teeth-kicking. On 1 July “La Giovane Umbria” decidedly cools down, dedicating as many as six columns, written with sarcastic fury, full of polemical strings directed to the authorities, to the hindrances of bureaucracy and to the distortions of the State apparatus, which threatened to compromise forever the realization of the cotton mill. There was a real danger of a long stasis and the imminent, general flight to the south of the Italian industrialists, attracted by the ten years of tax exemption provided for by the law on Southern Italy. The same newspaper, on 16 September, does not hide the fact that the city’s political fringe and all the landowners, worried by the problem of the rise in wages caused by the industry’s entry into a small agricultural enterprise, are decidedly opposed to the project.

Months of throbbing, feverish anticipation follow one another, until on October 14 “La Giovane Umbria” and the day after “Il Pensiero Radicale” both announce that the cotton mill is a reality: the Provincial Council, on October 12, 1906 – a day that “shall remain a memorable date in the city yearbooks” – definitely okayed the settlement of the cotton mill in Spoleto.

“La Giovane Umbria” of 25 November and “Il Pensiero Radicale” of 1 December 1906 both explain that the company to be established has a capital of two million, divided into shares of 200 lire and they strongly underline that the mayor Arcangeli managed to obtain that a part of the shares – 1000 for the sum of 200,000 lire – were the prerogative of the local capital of Spoleto, also through public subscriptions. 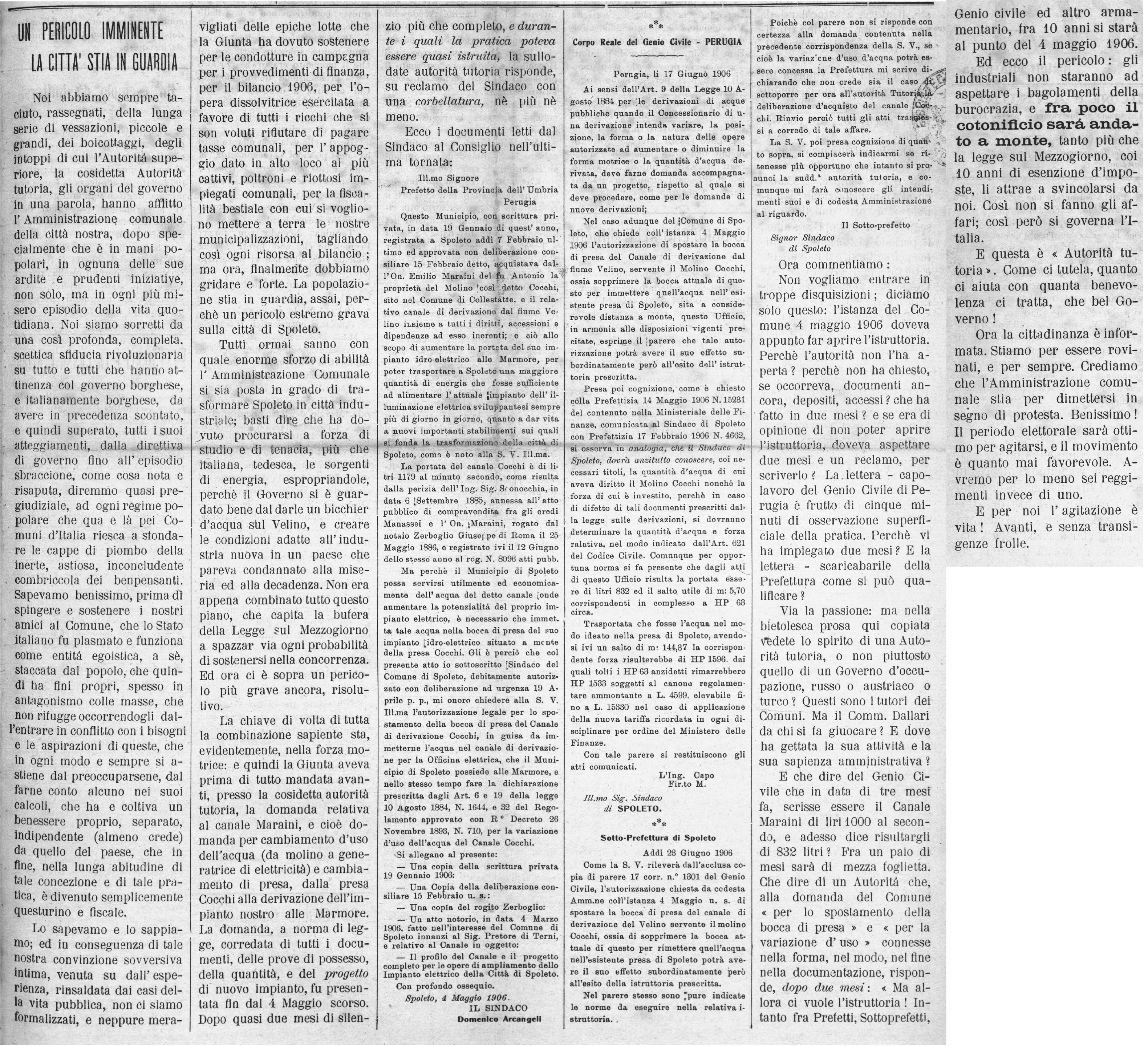 1907 Sunday 13 January. “La Giovane Umbria” comes out with the news that the Friday before, the deed of incorporation of the Società Anonima “Cotonificio di Spoleto” was stipulated in Milan, led by one of the major Italian textile manufacturers: Carlo dell’Acqua. The contracts for the purchase of the areas near the railway station and the contract with the town hall would be signed in Spoleto a few days later. The town is preparing for a popular celebration to celebrate the event conveniently. The company’s representatives arrive in Spoleto on 19 January and stay until January 22 when, after signing the papers (a “nuptial contract between Spoleto and industry” plethorically exclaims “La Giovane Umbria” in the January 27 issue) property and town council celebrate with a dinner at the Lucini hotel. It is announced that at the beginning of March the first part of the factory will be built at a cost of half a million lire.

Nevertheless, the history of Spoleto’s industrial fortunes also includes less-than-edifying episodes. Before coming into operation, in 1908 there were roof collapses caused by construction neglect (“Il Pensiero Radicale” of 15 October 1907) and severe injuries to workers (“La Giovane Umbria” of 5 January 1908).

In an article that appeared on the “Messaggero” in May 1910, local entrepreneur Ettore Santi is interviewed; alongside the oil and olive tree industry and, above all, the lignite mines in S. Angelo and Morgnano, “the most important industry in Spoleto is the cotton mill started by some Lombard capitalists, which is the major work of the popular parties. This important factory caused the City of Spoleto to enlarge its hydroelectric plant, and the disputes that arose over the opportunity of having welcomed the industry here, because of the burden the city took upon its shoulders with the electricity supply contract, are well known. The plant is very important: it employs about 600 workers and the city of Spoleto follows its development with great interest, also because about 200,000 lire of Spoleto’s capital are employed in it”. 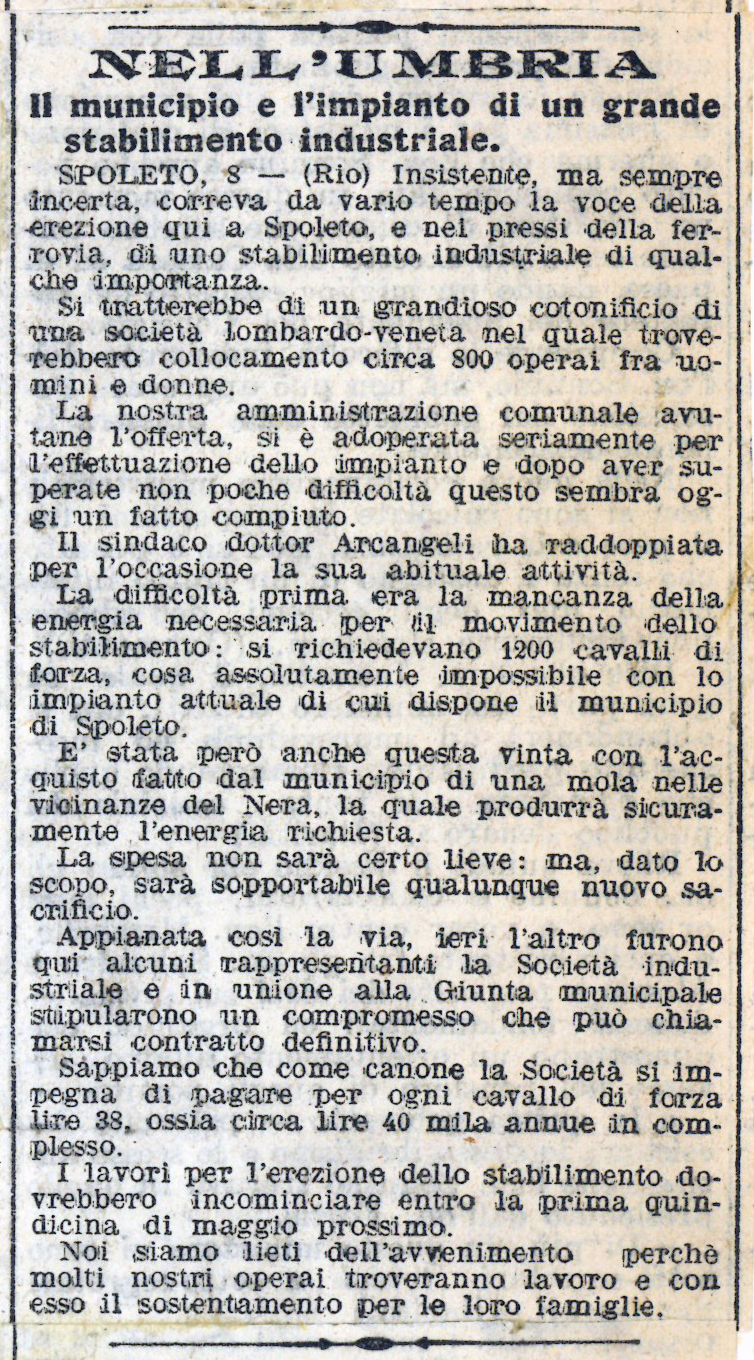 The Spoleto cotton mill would finally cease its activities in the mid-1980s, after changing fortunes which included closures and reopenings, crises and strikes, trade union struggles and economic and employment difficulties. The whole, huge complex was pulled down in 1990 and left the room for a new Police School.

From 12 November 2021 to 6 March 2022 at the Rocca Albornoz – National Museum of the Duchy of Spoleto, an itinerant exhibition that offers the unique opportunity to admire at the same time the...
Jan
20
Thu
all-day Exhibition | MAURIZIO CANNAVACCI... @ Palazzo Collicola
Exhibition | MAURIZIO CANNAVACCI... @ Palazzo Collicola
Jan 20 all-day

Exhibition at Palazzo Collicola 18 December 2021 – 13 February 2022 Presentation Saturday 18 December at 12,00 am Throughout his life, American architect and designer Richard Buckminster Fuller (1895-1983) has always been imagining the future,...
View Calendar