In May 1930, an important national exhibition took place at the Teatro Massimo (now Teatro Nuovo Gian Carlo Menotti) to present the country’s best olive oils. The exhibition was organised by the Istituto Sperimentale di Olivicoltura di Spoleto (Spoleto Experimental Institute of Olive Growing), a prestigious institution active in town since 1903, when it was founded under the name of Regio frantoio sperimentale (Royal Experimental Oil Mill). More than 500 producers took part in the competition, welcomed by a town decked out for the occasion.

Some articles from the local edition of the “Messaggero”, published in the early months of 1930, are preserved in the “Carducci” library. They help us to reconstruct the various organisational and celebratory stages of this important event, which is the focus of this new appointment with the “Long Ago In Spoleto” column. 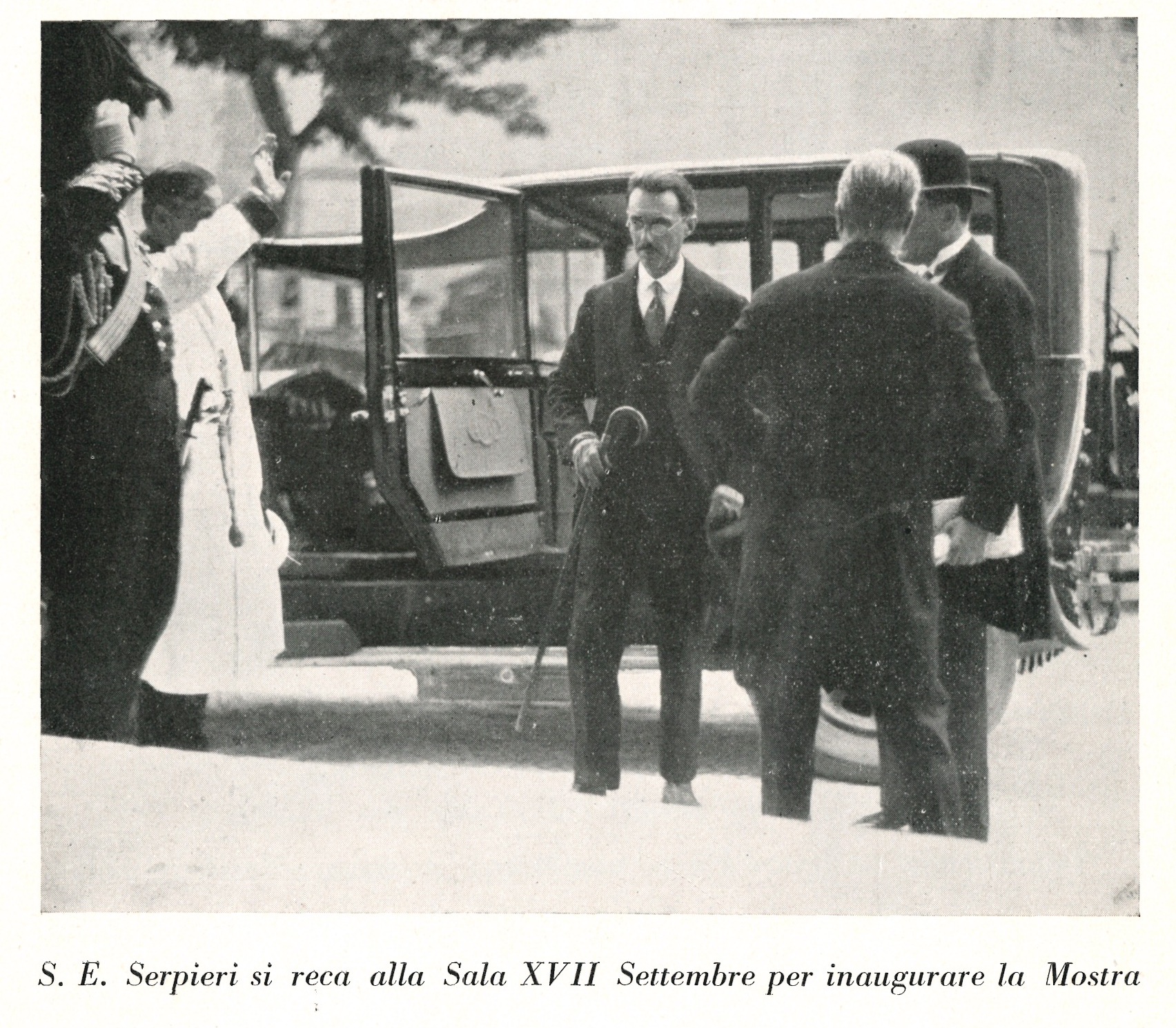 In January 1930 was announced the authorisation by the Head of Government who, by decree of 14 January, officially instructed the Spoleto Experimental Institute to promote a national exhibition of olive oils, an important showcase and – wrote the ‘Messaggero’ – ‘all the more beneficial, because the teaching of Umbria, a master in this field, will be revealed in every olive-growing area in Italy’.

More details about the event appeared one month later: the exhibition of Italian olive oil production – scheduled to take place in Spoleto from 18 to 29 May – ‘aims to showcase the best that can be produced in Italy in the field of olive oils’. Exhibitors must necessarily be direct producers. For the best success of the event, a great effort is being made with the economic support of the Ministry of Agriculture, the Provincial Councils and other bodies in Umbria. An organising committee, chaired by the Royal Commissioner of the National Olive Growers’ Society, Count Giuseppe Pavoncelli, was given the task of supervising the entire organisational machinery with the help of an executive committee headed by the then President of the Spoleto Experimental Institute, Giulio Cesari. Two categories will be admitted to the competition: edible and industrial oils. 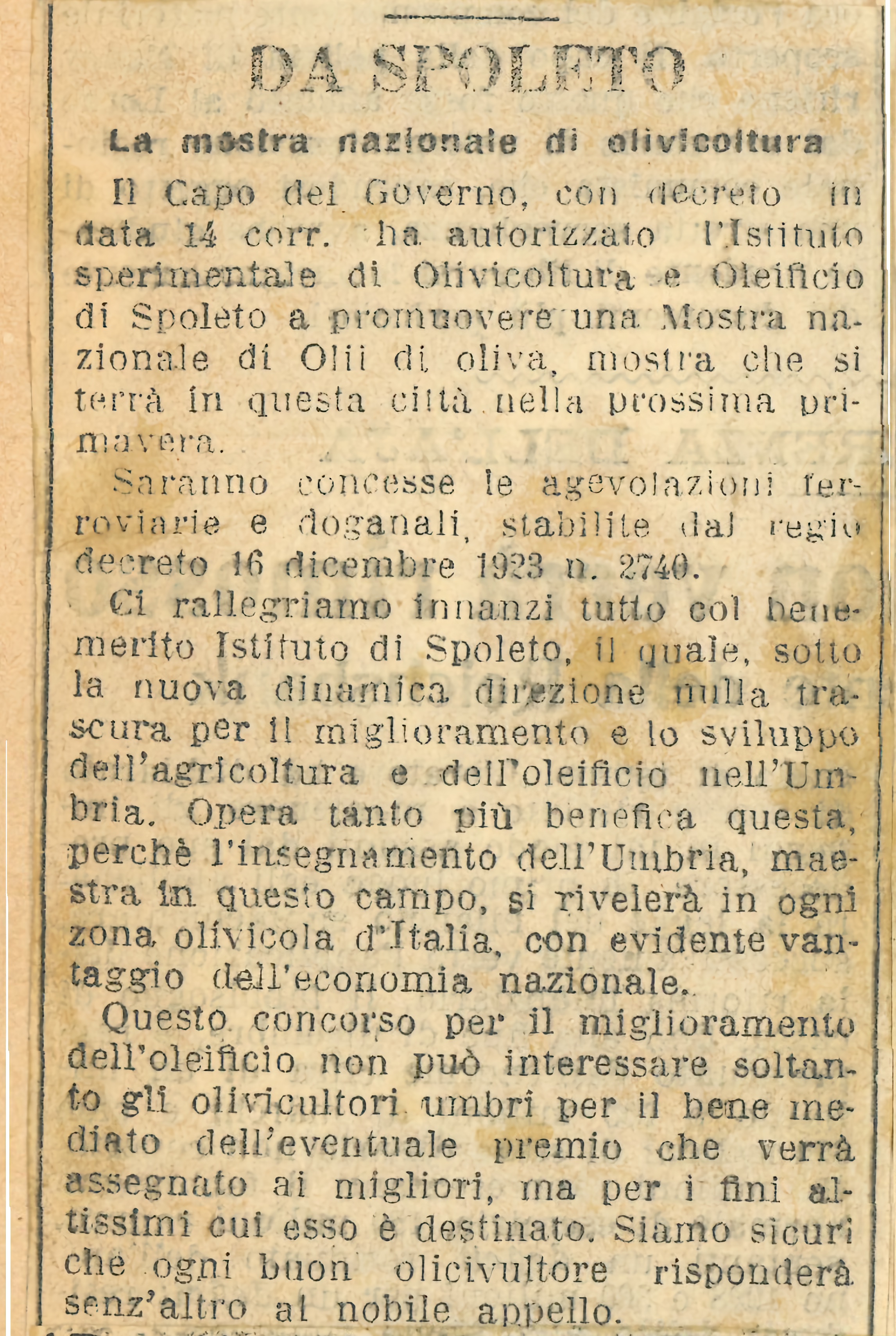 In March, the dates of the event were confirmed, assurances were given regarding the large number of ‘requests to participate from the most varied olive-growing countries’ and it was emphasised that ‘numerous medals, many of which were of considerable value, had been made available’ not only by the Ministry of Agriculture and the National Farmers’ Society but also by the City of Spoleto and various credit institutions. The dates of the exhibition were actually adjusted as the work progressed. The three articles in the “Messaggero” recount the success of the initiative with reassuring emphasis, reporting the inauguration of Sunday 26 May 1930 in front of a decorated town, which responded with pomp and enthusiasm, that actually went on for a fortnight, until Sunday 8 June.

The profusion of authorities and prominent figures present at the inauguration included Arrigo Serpieri, Undersecretary for Land Reclamation, who – as the Messaggero reported in its article of 26 May – ‘praises the organisers of this exhibition which is being held today in Spoleto, where for more than twenty-five years the olive tree has been cultivated and new oil production systems have been taught […] At the end of the opening ceremony, the authorities and participants moved on to the splendid Sala XVII Settembre, annexed to the Teatro Massimo, where the exhibition was being held. The room is magnificent for its decorations and the exhibition is well laid out and contains over 600 samples from 530 exhibitors representing 50 provinces. The entire artistic organisation of the exhibition was taken care of by the distinguished Professor Giacomo Panetti of Spoleto, who also designed the characteristic advertising poster.

In the second article in May, it is said that ‘in the shop window of the Subbioni goldsmith’s shop in Corso Vittorio, beautiful gold medals of great value can be seen, almost all identical in size; and, we repeat, of great value, because the one from the Banca Popolare di Spoleto we know – forgive us for our imprudence – costs 1,100 lire’.

The June article is dedicated to the glittering parade of award winners. There were many awards for local production: in the category of natural or pressure oils, a diploma of great honour and the Committee’s gold medal went to the Oleificio Cooperativo di Spoleto for extra fruity or sweet oils. Sub-category awards also went to Mr Giuseppe Benedetti del Rio di Poreta (diploma and gold medal from the Banca Popolare di Spoleto) and Pietro Piccioni di San Giacomo (gold medal from the City of Spoleto). For fine oils, diplomas and a vermeil medal from the Ministry of Agriculture went to Mr Massi Benedetti from Bazzano, Luigi Marini from Terraia and Count Morelli de’ Pazzi, while the diploma and silver medal from the Società Nazionale Olivicoltori went to the Società Commerciale Industriale Agricola di Spoleto. Vincenzo Desantis received the bronze medal from the Ministry of Agriculture for the fine oil category. In the category of non-edible industrial oils, the silver medal of the Provincial Council of Economy went to Count Morelli de’ Pazzi.

All prizes, results and final considerations on the products of the exhibition and the outcomes of the event are contained in a publication, kept in the library, edited by the Istituto Sperimentale di Olivicoltura (Experimental Institute of Olive Growing) and printed that same year by Premiata Tipografia dell’Umbria; the volume iincludes the images we propose here.