Epiphany has just passed, reminding the manifestation of Jesus to all peoples.

Among the major solemnities of the Catholic Church, the Adoration of the Magi and the Epiphany runs through the entire history of art, and is especially central to the Renaissance. Today, however, we will talk about how it was represented by the Langobards.

These people originally practised paganism and worshipped female gods linked to fertility and the earth. After coming into contact with other Germanic peoples, they adopted the cult of male gods of warlike inspiration such as Wodan (Odin).

Later, during the settlement between Noricum and Pannonia, the process of conversion to Christianity began. The adoption of the new religion was initially superficial and instrumental, responded more to political than spiritual needs, so much so that the pagan religion continued to survive among the population. Having descended into Italy, the Langobards soon realised that to consolidate their power and unify the peninsula, it was necessary to get closer to the Pope and have his support.

We know, however, that a rex Langobardorum ruling the whole of Italy was not exactly in Rome’s plans, which would seek external support to counter their power. More on this later.

The process of conversion to Catholicism and the abandonment of pagan and Arian roots was the first step towards the political and social integration between Germans and Roman subjects, that religious differences had till then prevented.

The Longobards’ progressive conversion to Catholicism was promoted by Queen Theodolinda (6th-7th century), helped by the intense missionary activity of Pope Gregory the Great. King Agilulf (591-616), encouraged by his wife Theodolinda, converted to Catholicism, led the Langobards to the new faith and strengthened his relations with the papacy. The entire population became, at least nominally, Catholic by the end of the reign of Cunipertus, who died in 700.

Two of the cities in the UNESCO serial site keep works considered to be among the most beautiful of Lombardic painting and sculpture on religious themes: Castelseprio and Cividale del Friuli. 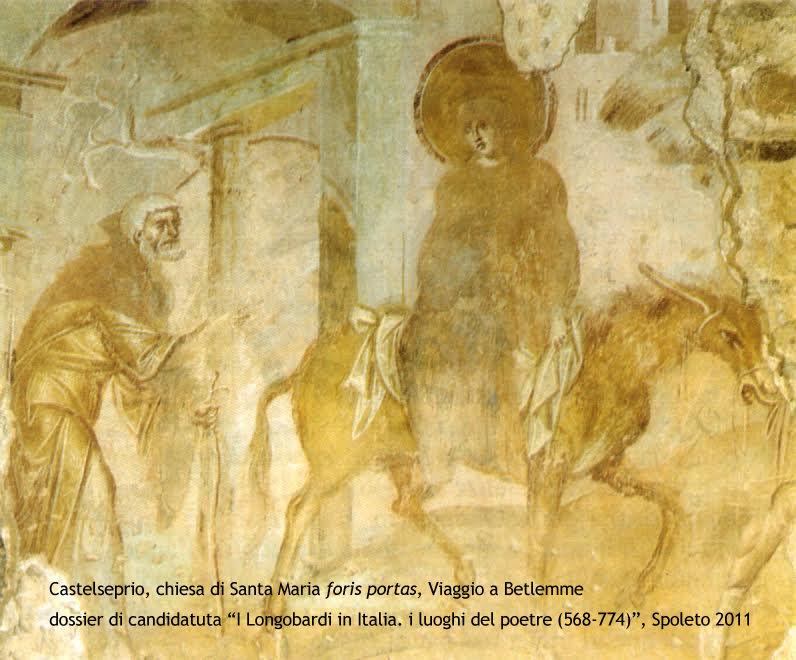 In Castelseprio, the precious cycle of frescoes in the church of Santa Maria foris portas depicts scenes from Christ’s early years. The compositional technique testifies to a vision of religion that is perfectly coherent with the last phase of the Langobards’ kingdom; having eliminated the Arian concept of Christ, the one brought to light by the frescoes is specifically Catholic. Next to the Nativity, on the wall separating the apse from the nave, is the Adoration of the Magi. The protagonists are distributed on several levels: on the right, Joseph, higher up – among the rocks – Mary and the baby Jesus surmounted by an angel; in the foreground are the Magi, dressed in oriental clothes and elongated shape. One of them is leaning towards the Child, to whom he holds out an oval tray, while the other two talk to each other.

The quality of the paintings, attributed to the so-called ‘Master of Castelseprio’, is very high: the expressive stroke, the ability to create a realistically three-dimensional and perspective space, the skilful use of highlighting denote a very skilful painting technique and a rich, refined patronage. 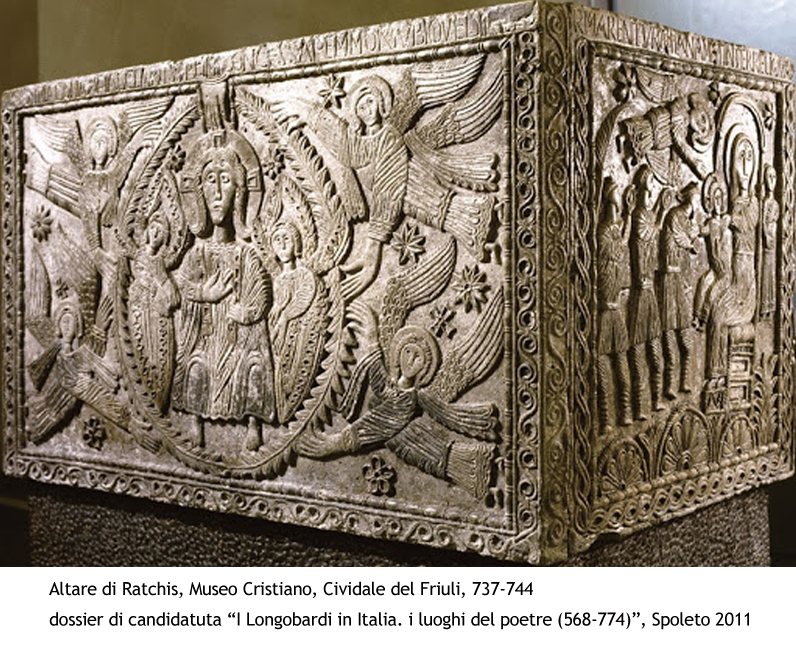 In the Christian Museum in Cividale del Friuli we can admire one of the most prestigious Langobard sculptural masterpieces: the altar of Ratchis. It was commissioned between 737 and 744 by Duke Ratchis to honour the memory of his father Pemmo, Duke of Cividale. It is a harmonious parallelepiped in light-coloured stone, intact on all four sides, richly decorated with Christian episodes: the Visitation of Mary to Elizabeth, the Adoration of the Magi, and the Ascension of Christ.

The Adoration of the Magi features the Virgin Mary, the Child Jesus, the Magi and an angel. The Virgin and the Child Jesus, under an arch, are in profile, but with their torso and head seen from the front; Jesus holds out his hands to accept the gifts offered by the Magi. The angel in flight is in a horizontal position above the Magi, pointing to Jesus with his right hand and leading the way of the three men. All the parts of the slabs left free of the figures have been filled with stars, flowers and small crosses so as to fill every space, a horror vacui (the horror of emptiness) typical of Langobard art.

The work is a clear example of the Longobards’ conversion process, the iconographic symbols of the almond and the blessing gesture coexist with elements typical of Germanic art.