In December 1897, at the Caio Melisso Theatre in Spoleto, one of the first film screenings in Italy took place. Cinema, as we know it, had just been born two years before.

On 28 December 1895, in Paris, in the Salon Indien du Grand Café, at 14 Boulevard des Capucines, in the Opéra district, the first paid screening of the new contraption invented by the Lumière brothers was held in front of a few spectators, a device enabling photographic images to be animated, giving the idea of movement, of the flow of life in time and space, and a degree of representational realism never before achieved.

Lumières’ is an invention that is imposing itself on a previous, similar technology, Edison’s and Dickson’s Kinetoscope which, exploiting film, allows, it is true, to watch images in movement, but through a viewer, an eyepiece with which to look, bent and curved, inside a sort of cabinet. The Kinetoscope is an individual and somewhat uncomfortable visual experience, as opposed to the collective vision on the big screen that would end up making the fortune of Lumières’ creation. Lumières were not only technological pioneers but also film authors, among the first to “record” cinematographic works of an eminently documentary nature.

The first experience with the Cinematograph in Italy took place in March 1896 in Rome; meanwhile, the first short films were also being shot. When a taste of what was to become the seventh art was first offered in Spoleto, cinemas were still a long way off. We were witnessing a sort of circus attraction, a freak show, a sort of exhibition interlude, presented in fact by entrepreneurs forced to pose as barkers and accompanied by musical numbers and comic sketches; a travelling chamber of wonders, set up mainly in rooms and halls equipped for the occasion or, when taking on a more prestigious character was wished as in Spoleto, in theatres.

On 27 December 1897 the first of five screenings of the Cinematografo Lumiére was held at the Caio Melisso, documented by a series of public posters and two articles in the local press, in the pages of the weekly magazine ‘La Giovane Umbria‘. Thanks to this material kept at the Carducci Library, we can reconstruct this extraordinary event that took place in our city in the column ‘Long Ago in Spoleto’. 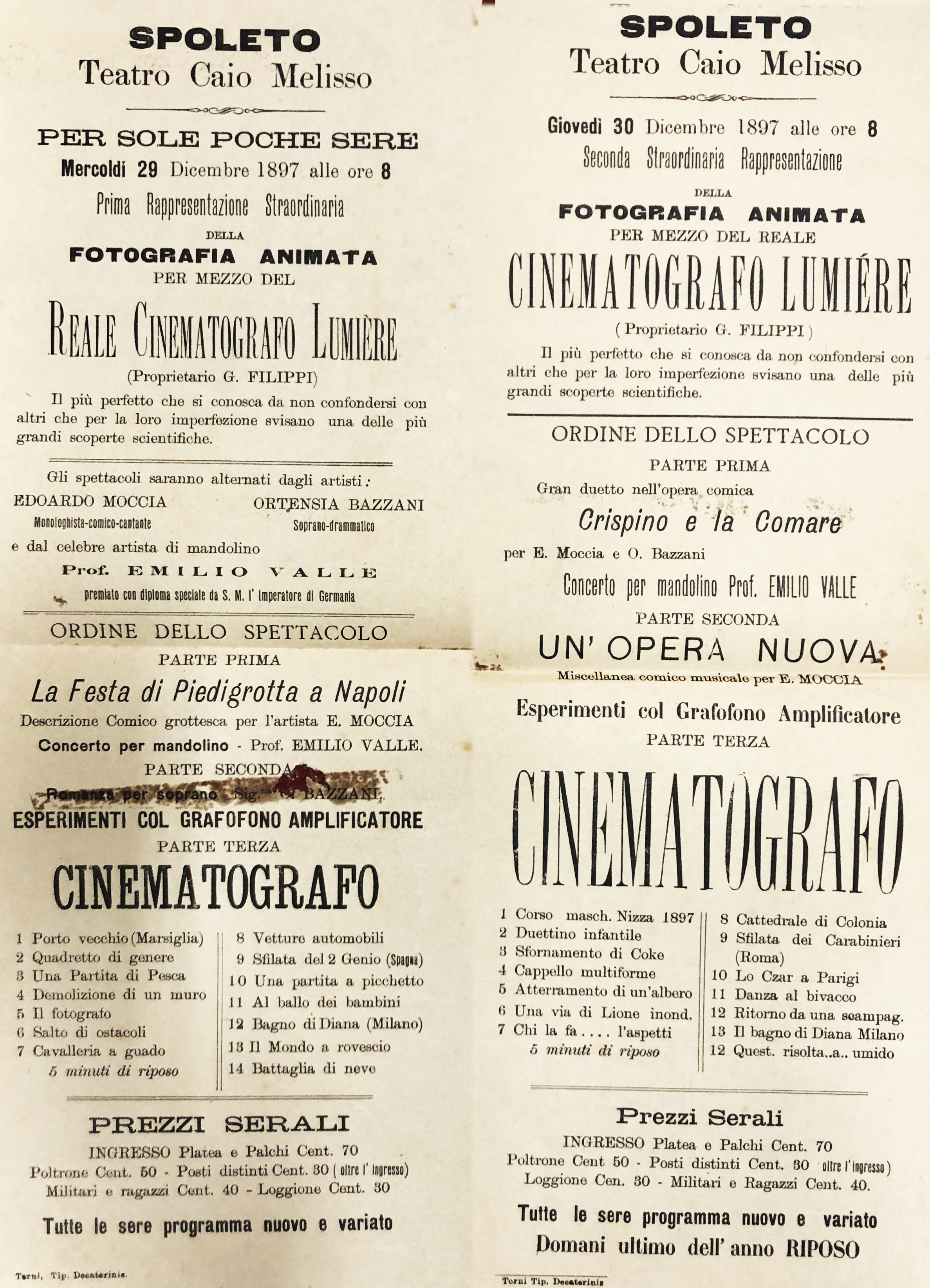 The ads (posters and playbills) state that it is “…the actual Lumiére cinema (owner G. Filippi), the most perfect known to man, not to be confused with others whose imperfection distorts one of the greatest scientific discoveries“, and that in addition to experiments with the graphophone amplifier, comedian Edoardo Moccia, mandolin player Emilio Valle and soprano Ortensia Bazzani will perform on stage. It is worth spending a few more words on Giuseppe Filippi, the owner of the cinematograph, a former postal worker, keen on photography and cinema enthusiast, who became a collaborator of the Lumière brothers, to whom we owe the diffusion of cinema in Italy, begun by Filippi in 1897.

Spoleto’s film programme changes every evening and between a view of Marseilles’ old port, a wall demolition, a fishing match, the Carabinieri parade, the filming of Puerta del Sol in Madrid, the Tsar’s visit to Paris, titles creep in that presage real gems: ‘The Arrival of a Train‘ and ‘Leaving the Lumière Workshops‘ could conceivably be those very works made by the Lumière and screened for the first time in public in Paris. On the contrary, “World Upside Down” and “Multiform Hat” are among the first experiments with special effects and photographic tricks – a genre diametrically opposed to the Lumière brothers’ documentary approach – a fabulous, imaginative style destined to become the poetic universe of one of the founding fathers of cinema: Georges Méliès.

But how did the audience in Spoleto react to this? In its issue of 1 January 1898, “La Giovane Umbria” stressed how the “audience, which, in the uncertainty of the first evening was not too large, increased considerably on the following evenings” and in the issue of 9 January it added that “they flocked in great numbers and were increasingly enthusiastic about the precision of the experiences” so much so that “some evenings the theatre was not enough for the spectators”. 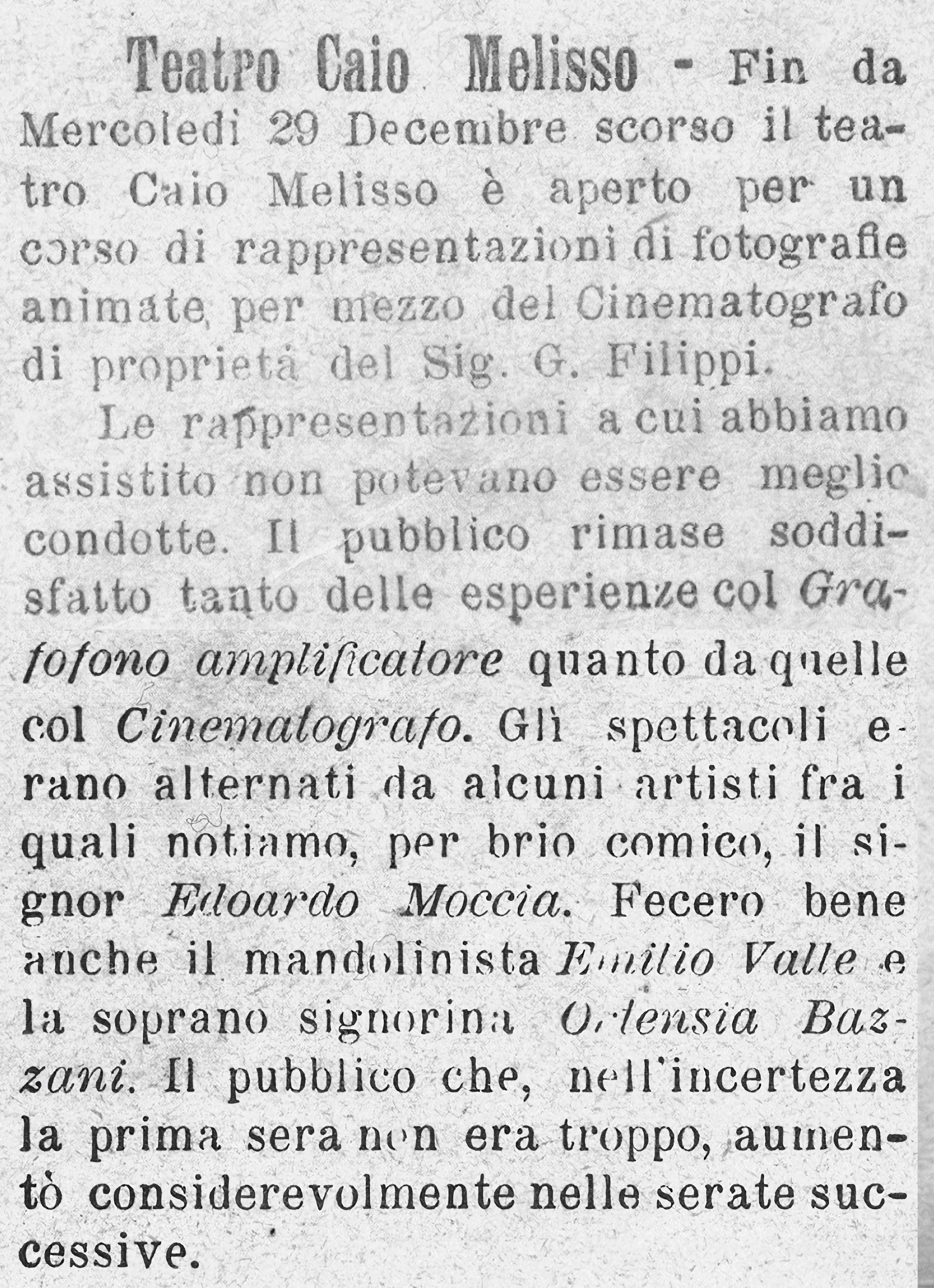 Cinema screening on the Caio Melisso stage would go on for several years. Before the first cinemas were built, in the 1910s a space for public screenings of films was inaugurated in Palazzo Mauri, a story that we will discuss in other episodes of this column.