August, 1904. The National Federation of Public Assistance is born from a congress in Spoleto

Summertime. Two special postcards were printed in the city to announce a long-awaited, prestigious event: the numerous public assistance societies in the country – voluntary organisations of a lay nature, born from the experience of the Società Operaie di Mutuo Soccorso and evolved into civil institutions of public utility – chose Spoleto as the venue for the 4th National Congress. 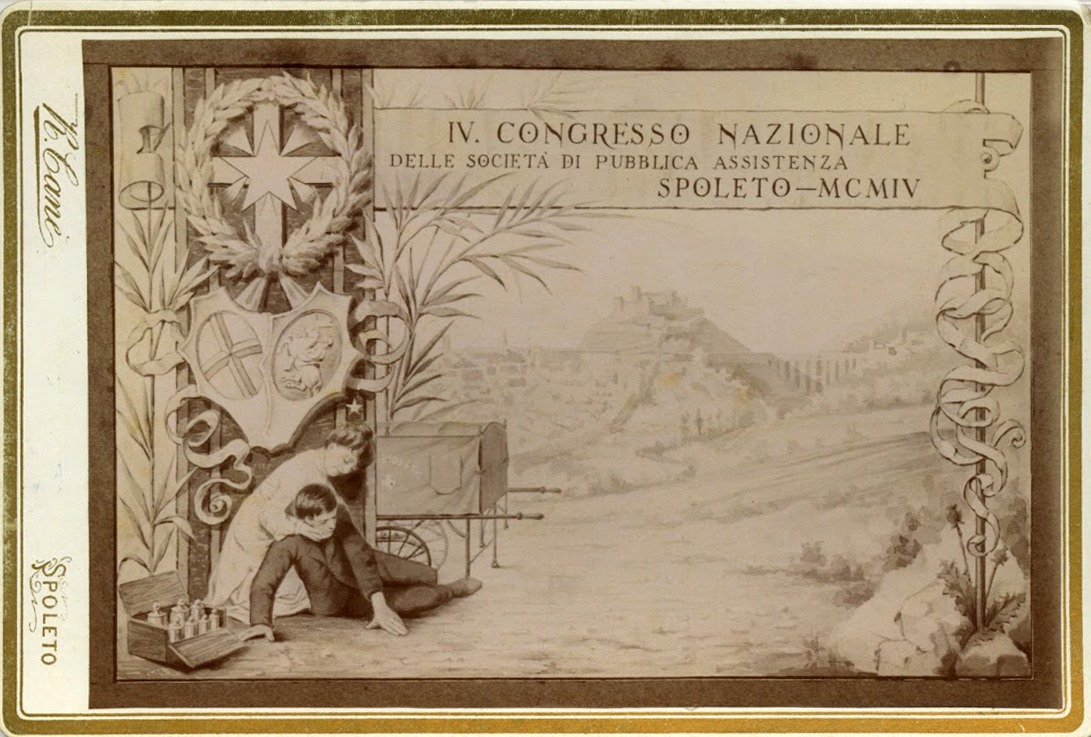 The postcards kept in the Carducci Library’s photo library are printed on stiff cardboard with the signature at the bottom by Raffaele Canè, a photographer working in the town whom we have already met in this column. However, it cannot be ruled out that Canè’s postcards are simply reproductions and that the originals – as reported in an article in the “Giovane Umbria” of 14 August 1904 – came from the Guizzi brothers’ company in Spoleto and were printed by Panetto e Petrelli.

Whatever their actual origin, the event advertised is a high-profile one: it is again ‘Giovane Umbria’ that describes in an article of 26 June, in the middle of the organisation of the conference, how “lawyer Paletti, president of the local Society of Public Assistance, and with him the lawyers Camillo Bezzi and Adolfo Mars went to Rome to confer with Minister Rava about the Congress, with the main aim of interesting the Government in a bill that will be deliberated and discussed among the various topics at the Congress. Accompanied by the MPs Sinibaldi and Marquis Pandolfi, President of the Confederation of the Societies of Public Assistance, the aforesaid Commission had a meeting with MPs Rava and Giolitti. Both ministers listened carefully to the Commission’s proposals and, accepting the honorary chairmanship of the Congress Organising Committee, formally promised to attend the opening session. In fact, on the same day, the Secretary of the Committee received the following telegram: Ministers Giolitti, Rava, promised official intervention in the congress. – Paletti – Bezzi – Mars.”

The congress lasted five days from Thursday 18 to Monday 22 August 1904. From the railway station as far as Porta Garibaldi, the street was festively decorated, “[…] in Corso Vittorio Emanuele there were four very striking blue drapes with green boxwood festoons. In white letters, there were writings expressing highly humanitarian aphorisms. At the ends of the streets, elegant flagpoles in bright, varied colours were on display. Around nine o’clock, the congressmen began to arrive at the town hall for the reception of honour. The halls of the art gallery were gradually enlivened by young ladies, the congressmen, the dignitaries with or without hats, the representatives of the press, the mayors of the district and the presidents of the working-class societies attending. The refreshments were splendidly served by the Nicolai company. At 10 o’clock the procession left Piazza Campello for the Teatro Massimo where the inauguration was to take place. It was preceded by firemen in full uniform and a city concert.

In addition to numerous interesting facts and other valuable details about the many events around the conference – the gala evening at the Teatro Massimo with Verdi’s Otello, of which the poster is reproduced, a motorbike race at Forca di Cerro, a country festival at Villa Redenta, the lighting of Monteluco, Rocca and Ponte – the above-mentioned article of 21 August, besides underlining how the associations’ participation in the conference was impressive, specifies en passant the main reason for the conference, which was destined to importantly impact the history of the Italian welfare movement: Arcangeli brought the conference participants the greetings of Spoleto. This was followed by a splendid, brilliant speech by Mr Paletti, president of our welfare association, who dealt at length with the modern tasks of charity, the duties of the State towards public welfare societies, and the most appropriate forms that the federation of these associations should use to spread and organise the spirit of charity among the working masses and the classes privileged by fortune in an increasingly civilised manner”. The “source federation”, specifies the article: and in fact it was from the Spoleto congress that the National Federation of Public Assistance and Public Relief Societies was born, later recognised in 1911 as a “Moral Body”.

A special bond has always existed between Spoleto and the Associazione Nazionale Pubbliche Assistenze. So, in 2014, while planning the celebration of the 110th anniversary of Italy’s largest voluntary movement, ANPAS significantly returns to choose Spoleto as the seat of its National Council.