In the spring of 1891, Achille Sansi, a figure of extraordinary importance to the city of Spoleto, died at the age of 69. Baron Sansi died in the early hours of 5th May, and the grave and solemn tones of the obituaries and condolence messages, coinciding with the date, seem to echo throughout the Spoleto community in a sort of Manzonian “Ei fu“.

The loss was certainly a huge one for Spoleto, in some ways even epochal. It would be sufficient to quote what Rinaldo Gherghi, the then director of the Spoleto library, wrote in a note commenting on the poster, still kept in the library, that the Town Hall had put up in the city as an invitation to the funeral: “One of the greatest citizens of Spoleto disappears from the scene of the world“.

Born in 1822, Achille Sansi was not only, according to the Accademia degli Ottusi, ‘the greatest historian in Spoleto‘, but also a man of many talents and eclectic erudition, capable of playing an important role in the growth of the city’s cultural prestige by virtue of his historiographic research but also for his contribution to the world of education and teaching, his interest in archives and museums, and his political and administrative commitment.

The Carducci library has three posters that were printed as public invitations to the funeral: one published in the name of the family, one, already mentioned, in the name of the City Administration and one by the Luigi Pianciani Mutual Aid Society which reads as follows: “After a tirelessly hard-working life spent entirely to the advantage and prestige of his native town, our very clear fellow-citizen B.ne Achille Sansi closed his eyes to the light for ever, leaving us with an endless desire for himself and an everlasting cult of admiration and gratitude. By inviting you to accompany his body to its final resting place tomorrow, we intend to call you to honour yourselves. The more it is evident that you knew how to remember and appreciate the high value and merit of the illustrious deceased, the more you will appear worthy of having been his fellow citizens.”

However, according to Gherghi’s comments, the procession from the church of San Domenico to the cemetery on the afternoon of Friday 8 May was ‘numerous but not as impressive as the deceased would have deserved‘.

Sansi’s stature and his many important contributions to the city are summed up in the obituary of Salvatore Fratellini, Mayor of Spoleto, who during the funeral said, among other things, these words: “It was Sansi who saved the libraries of the suppressed religious corporations, reorganised them and collected them. He was a member of the Municipal Commission in 1860, and after having emancipated the charitable works from ecclesiastical dependence, he brought together the precious historical memories that had hitherto been uncivilly neglected, reassembling them with wisdom and endowing the civic archives with an intellect of love. He was a member of the Academy of Fine Arts in Florence; he was the soul of our Accademia degli Ottusi. For over thirty years he was a councillor of the City, a prudent, industrious and diligent administrator of public affairs. Superintendent of Schools, to him we owe the equalisation of our Gymnasium, to him we owe the fortunate election of valiant teachers, to him we owe the disciplined organisation of our educational institutes. Commissioner for Ornamentation, Statistics and Archaeology, to him is due the new denomination of our streets…” 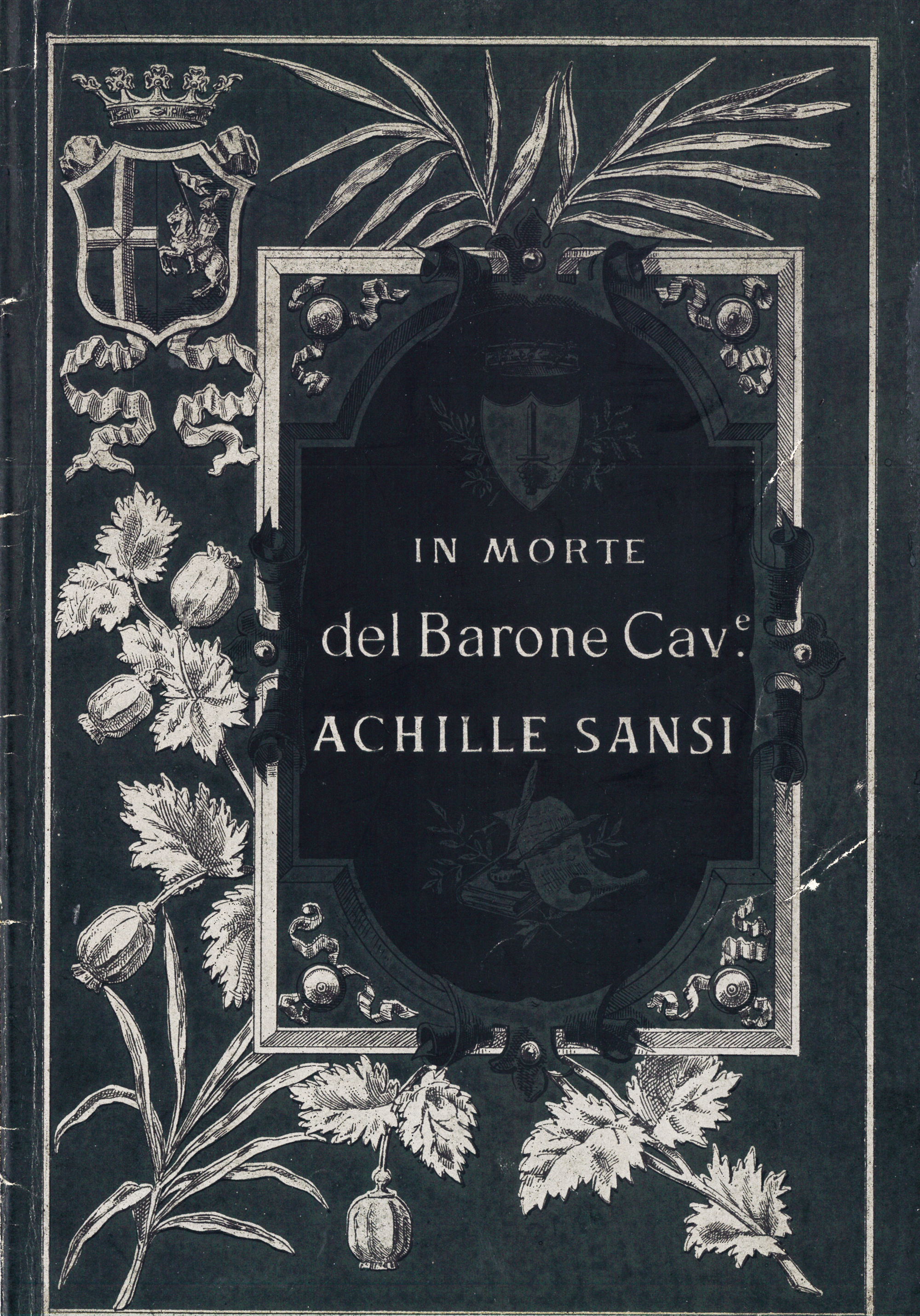 The memory of Sansi at the council meeting of 26 May 1891, again by mayor Fratellini, is imbued with more human accents: “He had a severe appearance, but was pleased with his lively and witty jokes. He had affectionate friends and non-envious admirers. As soon as our lands were restored to free life, his fellow citizens elected him City Councillor; and his death marked the end of this office, which he never interrupted […] And our schools flourished thanks to him, and our Archives collected ignored treasures, and our City gained the reputation of being cultured and civilised. […] He was praised and honoured by illustrious Italians and foreigners, but he did not benefit from praise, since with an excess of modesty he burnt many documents of praise, perhaps not wanting them to be known after his death. Of patrician origin, awarded with two equestrian orders, he cared more for his works than for the name of Noble and Knight!“

In 1972, on the occasion of the 150th anniversary of his birth, the Accademia Spoletina, of which he was the secretary for many years, wished to commemorate his memory through a number of initiatives, including a conference, a documentary exhibition in Palazzo Mauri and the anastatic reprinting of his historical works on the events of the city from the 12th to the 17th century, a monumental corpus that can also be consulted in its entirety online: https://bit.ly/3gHwbDv.

The Liceo di Spoleto and the 17th-century residence (palazzo Leti-Sansi) where he lived for many years are both co-named after him.