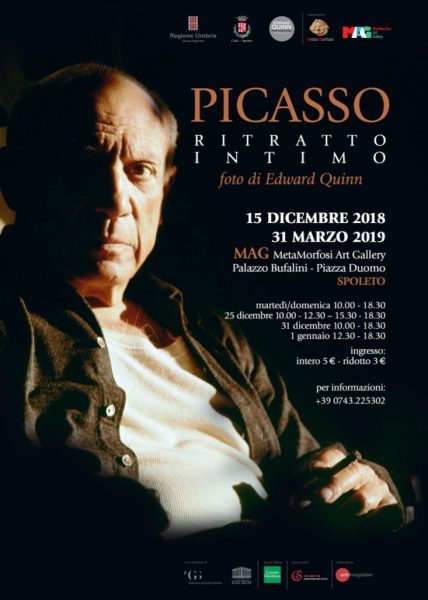 On the occasion of the forty-fifth anniversary of his death, and in conjunction with numerous exhibitions around the world dedicated to him, Spoleto celebrates the genius of the Spanish artist with the exhibition PICASSO. INTIMATE PORTRAIT Photos by Edward Quinn, presenting a large series of shots, some of them unpublished, taken by Edward Quinn (Dublin 1920-Switzerland 1997), the photojournalist who followed Picasso (1881-1973) to the Côte d’Azur and portrayed him, with his permission, for about twenty years.

From December 15, 2018 to March 31, 2019, MAG MetaMorfosi Art Gallery in Palazzo Bufalini in Piazza Duomo will feature about eighty photos (two sizes on display 40×50 and 30×40 cm) that tell the story of an absolutely private Picasso: among his women, lovers and friends, among his children, the result of many passions over the years, among the many friends and acquaintances who populated his canvases as well as the laid tables and the beaches by the sea. As many as 26 of these photos are unpublished and never printed before. The photos come from the Quinn Archive, Zurich, and were selected by the exhibition’s curator, Wolfgang Frei, the photographer’s nephew.

The exhibition, produced and organized by MetaMorfosi under the patronage of the City of Spoleto, is the result of the special friendship that linked Picasso to Edward Quinn, as his nephew explains by reconstructing their first meeting on the Côte d’Azur: “”Lui, il ne me dérange pas”, (“He does not bother me”) says Picasso after having been photographed for the first time during his work on March 23, 1953. So Quinn became one of the few photographers who was allowed to photograph him at work and who was accepted in his private life.

Born in 1920, Quinn moved to Munich in the late 1940s. Probably there has never been a place like the Côte d’Azur of the 1950s and 1960s where so many stars, politicians and artists have lived or spent their holidays. One of the personalities who settled on the Côte d’Azur was Picasso: he already was a star. Quinn managed to take his first photos of Picasso with his two children in 1951. The artist liked the photos and agreed to the request for further shots. Two years later, the first photo shoot took place with Picasso working with ceramics. Quinn did not belong to the breed of the insistent paparazzi, like tabloid photographers. In this he was too much of an Irish gentleman. He soon became a friend of Picasso, as shown by the 1954 dedication to the linocut “Toros en Vallauris”: “Para el amigo Quinn – el buen fotógrafo”.

“Even if Quinn – Frei tells us – was a dear friend, it was almost never possible to make an appointment with Picasso in advance. Often Picasso gave the order not to be disturbed. Almost all visits were unexpected and improvised. However, this was in line with Quinn’s way of working: his shots did not need long technical preparations. He didn’t use the tripod and refused to artificially light the rooms and have Picasso pose for a photo. The aim was to show under what conditions the artist created his works”.

The objective was unconventional, credible, authentic, documentary photography. The photographs on display, many of which have never been published, reveal how the artist was inspired by everyday things and people, but also by the extraordinary things that surrounded him. In this vision of his personality, of the people behind the images, also clichés about reality and opposites become visible: free time alongside work, everyday life in relation to art, Casanova and the family man, the clown and the extrovert joker, but also the very attentive master.

A fascinating intimate portrait of the artist that covers a period of over 20 years and tells an unusual Picasso, authentic and rich in humanity.

A selection of images in the exhibition can be downloaded from the following link:
https://tinyurl.com/Picasso-Spoleto