Toward Monteluco on the steps of San Francesco

This itinerary is a round trip. Therefore, while the outward leg is almost totally a climb, to reach the small hamlet of Patrico, the return goes down all the way to Spoleto. In spite of the long rise that leads to the 1000-m-high Patrico, yet the route is considered an average one, because the gradient is almost never harsh, and the length is just 31 km. Let’s get out of downtown Spoleto and head out to the SS 3 Flaminia, which you’ll cross to start the rise to Patrico and Monteluco.

Past the church of San Pietro and the Ponte delle Torri, the route goes on in the deep of the wood. In Monteluco, before going on, a visit to the Sacred Wood and to the Convent of San Francesco is a must. From the lawns in Monteluco you follow the direction Patrico: after a few km of wood, on top of the mountain pass, the sight becomes breathtaking and rewards all strains faced. All around you can see the Monti Martani, the Umbrian Valleu and the Mount Subasio, as well as the Valnerina and the Sibilini ridges. Surrounded by such landscape gorgeousness, you reach then Patrico.

Montefalco and Bevagna, among vineyards and wine cellars

The route is north of Spoleto, and passes through famous, enchanted villages such as Montefalco and Bevagna, with a number of miles on the Strada del Sagrantino and its valuable vineyards and age-old olive groves. The only actual difficulty is the rise from the Sanctuary of Madonna della Stella to Montefalco (7 km). Its 70 kms make it an average route, suitable for cyclists with good training behind. You exit Spoleto through viale Marconi and reach Pontebari, then San Venanzo; there, you turn to the right, direction Protte, to avoid the SP 451. Here you can proceed through the countryside, with Trevi and Mount Serano on the right, till you find the old hamlets of Protte and Castel San Giovanni. Once back on the SP 451 in La Bruna, you turn to the right and go on toward Montefalco. You pass in front of the Sanctuary of Madonna della Stella, opened in 1884, and from here you start the mild rise to Montefalco, through vineyards and olive groves. Montefalco, a.k.a. “Umbria’s Railing” because of its panoramic position, has a charming downtown and is the beginning point of the descent to Bevagna, passing through Montepennino.

Once in Bevagna (to be visited going straight ahead), after the bridge on the river Teverone you turn to the right and take the cycle lane, that in 30 km, almost totally flat, will lead you back to Spoleto. The cycle lane is interrupted here and there by some crossings, where you need to pay attention to the traffic, leads you peacefully to Spoleto, where it will be necessary to make use of the ordinary roads. Crossing San Nicolò through a series of secondary roads, you’re back in town.

This average route is divided into two very different legs: the first one is totally flat and touches Protte, Beroide, Castel San Giovanni and finishes at Mercatello; the second one, after Mercatello, features a neverending series of ups-and-downs, through Colle del Marchese, Castel Ritaldi, Uncinano and Sant’Angelo in Mercole, before returning to Spoleto; the steepest parts are those to Castel Ritaldi and Uncinano, with gradients around 10%. Not an out-of-reach route by the way, featuring a number of landscapes and old hamlets, actual pearls of history and charm. You exit Spoleto through viale Marconi, pass Pontebari and, once at San Venanzo you turn to the right, direction Protte. Further on, deep in the Umbrian Valley, you overcome the fortified hamlets of Beroide and Castel San Giovanni, before reaching La Bruna. Here you turn to the right, direction Bastardo, and go forth for a few miles on SP 451, starting to climb mildly just after Mercatello. The first actual rise starts at Bivio Moscardini, where you turn to the left toward Colle del Marchese, that you reach after pedalling through olive groves and vineyards, among the splendid sights on the Monti Martani and surrounding hills. You go straight ahead and, at the end of the descent, you soon start climbing again toward Castel Ritaldi: a brief, yet demanding rise (< 1 km) leads to the centre of the village, where you also go straight ahead.

At the crossing with the main road, you turn to the right and soon after, to the right again, direction Uncinano, pedalling toward the Monti Martani on a road that keeps on going mildly up, crossing silent fields and vineyards. You start to catch glimpses of Uncinano to the left. The last rise of the day is also the hardest, featuring a first km that often exceeds the gradient of 10%. Past the village, the road keeps on climbing less demandingly for 1 km, after which you pedal up and down for a few km, till Sant’Angelo in Mercole. From here, you only need to pay attention to the narrow road that goes down to San Nicolò where, in just a little more than 2 km, you’re back in Spoleto.

The beginning and the end of this itinerary coincides with the itinerary “At Silvignano, among olive trees, hills and castles” (Easy Routes), but its central part features the rise to Trevi, that gives you the chance to visit this charming village, to enjoy a wonderful sight on the Umbrian Valley, and to cross one of the lushiest spans of olive groves in Umbria.
The 48-km-long distance is not particularly demanding, yet the presence of two inclines (long but not steep) make us consider the route as an average one, suitable for cyclists with at least a basic training. You get out of Spoleto through viale Marconi and reach the Spoleto-Assisi Cycle Lane in Pontebari. From here we cover the route, already detailed in the other itineraries, toward the north; you turn then to the right and access the ordinary roads, following the directions to Trevi.

You start the 3-km-long mild rise to Trevi: a wide, well paved road among olive trees, bends and gradients under 5-6%. On the right, you can stop to visit the church of Madonna delle Lacrime, magnificent Renaissance temple that keeps works by Lo Spagna and Perugino.

Once in Trevi, “City of the Oil”, you start going down toward Bovara and Spoleto, on a splendid, panoramic road among oil-mills and unbounded spans of olive trees, till the former SS3 Flaminia toward Spoleto. Past the Tempio del Clitunno and the Fonti del Clitunno, you turn to the left toward Campello sul Clitunno and start the rise to Silvignano. The rise is 5 km long, yet the inclines are more demanding than those featured in the rise to Trevi, especially in the final part; it is therefore to be faced with the right pace.

Once in Silvignano you can start going down to Spoleto, passing through Cortaccione and close to the fortified hamlet of Eggi (that you can visit by opting to extend the route of 1,5 km) and return to the city. 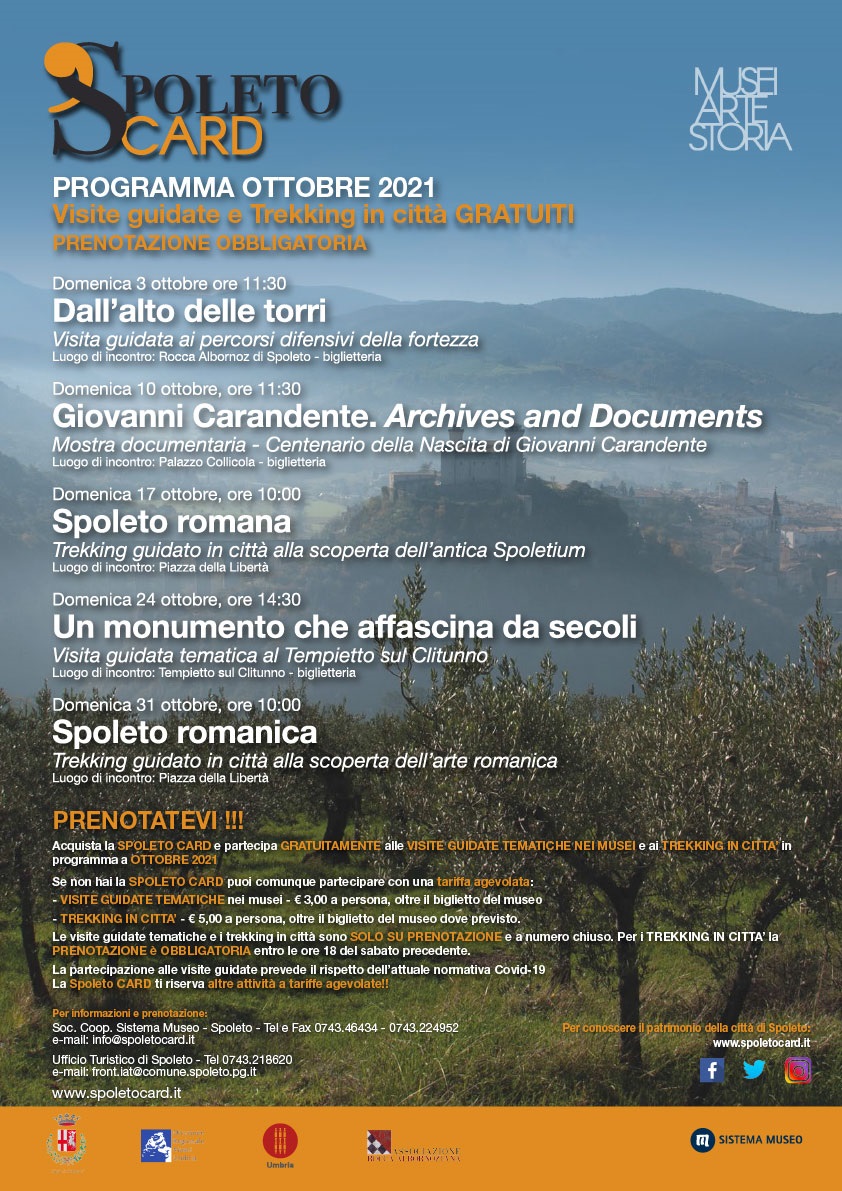 VITTORIO MESSINA | DISHABITAT Palazzo Collicola, from 9 October 2021 to 30 January 2022 exhibition curated by Marco Tonelli and Davide Silvioli The opening is scheduled on Saturday 9 October at 11.30. Reservation required: cultura.turismo@comune.spoleto.pg.it...
Oct
26
Tue
all-day Exhibition | LATE GOTHIC ENCHANT... @ Museo Diocesano
Exhibition | LATE GOTHIC ENCHANT... @ Museo Diocesano
Oct 26 all-day
From June 15 to November 7, thanks to the precious collaboration of the Vatican Museums, the triptych composed of the Madonna Enthroned with Child and Angels, currently housed in the Diocesan Museum of Spoleto, and...
View Calendar