In via Visiale, between via del Municipio and via Saffi, there stands the Roman House, just above the Roman Forum.

The first excavation campaign was led between 1885 and 1886 by Spoletan archaeologist Giuseppe Sordini, thanks to funds granted by English ambassador sir John Lumley-Savile; however, these funds ended and it was necessary to wait until 1912 to finish the job. During the excavation, an inscription was found, with a dedication by some …Polla to emperor Caligula; this led to think that the house belonged to Vespasia Polla, mother of Vespasiano, born in Norcia and owner of properties in the area between Norcia and Spoleto. The domus dates to the I century AD and its spaces still maintain, besides the very beautiful floor mosaics, the typical layout of patrician houses between the end of the Republican period and the beginning of the Empire.

Past a short corridor, you access the atrium, where you find the impluvium, with a tank underneath, and the compluvium, open on the roof. At the sides there are cubicula and alae, secondary spaces, yet with remarkable mosaics. Aligned with the atrium there is the tablinum, the house’s boardroom, flanked by two spaces whose mosaic decoration was probably realized later than on the other floors: the space on the right is the triclinium, at a higher level and still decorated by fragments of frescoes; the space on the left leads to where there was once the peristilio, the inner garden with portico, of which only fragments of columns remain.

Above the Roman House, there is the City Hall, which came back to its original splendour after the restoration works for the 1997 earthquake. 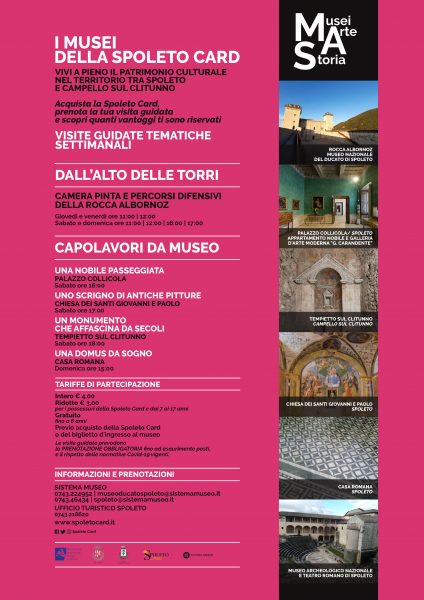