The Langobards considered it dishonourable to die of old age in one’s own bed; the greatest honour was to die in battle alongside one’s brothers.

The typical equipment of the high-ranking warrior in the first period of settlement in Italy included spurs, saddle and stirrups, shield, spear, spatha, scramasax, sometimes armour and helmets.

The Arimanni, i.e. all free men, were called to arms and had to equip themselves with a warrior’s outfit that varied according to social rank, both in terms of the number of weapons and the presence of decorations embellishing them.

Scramasax was a short, single-edged weapon and was used as a sabre in hand-to-hand combat. In the course of time the blade grew longer, from the initial 20-30 cm to 70-80 cm in the late 7th century-early 8th century (Langsax). It was carried in scabbards suspended from the belt and was also used as a tool.

The belt was a very important element, its decoration reflecting the social status of the wearer; it was generally made of leather and adorned with trimmings, tongues, buttons and other elements in damascened metal or gold.

The most important and noble weapon was the spatha. An essential object of the male aristocrat’s warrior identity, it was passed down from father to son, or became part of the deceased’s burial equipment to underline his important status as a warrior. 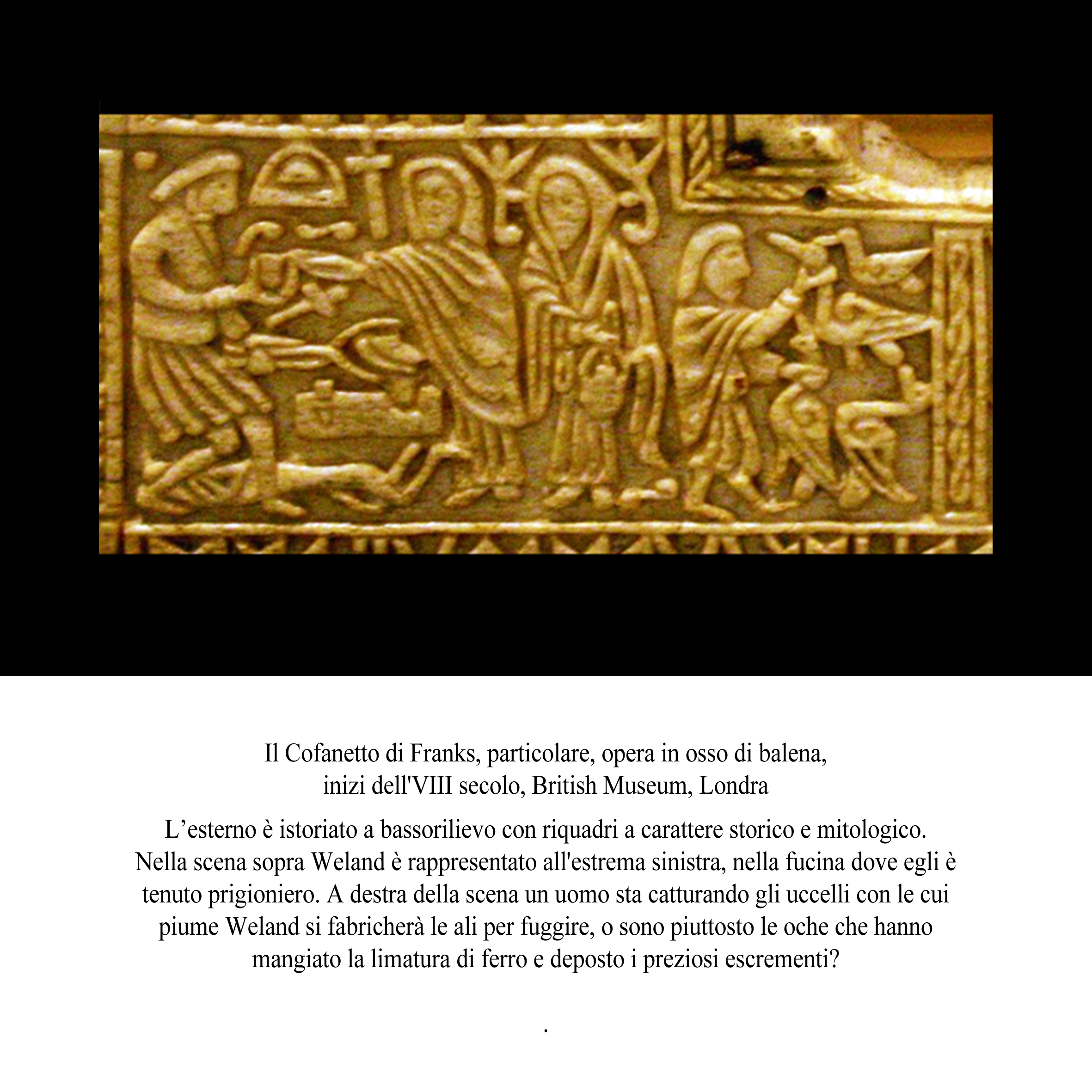 It is a very long weapon (on average between 90-95 cm) with two blunt edges and a blunt tip, used to strike with the edge and not with the point, unlike the gladius – a traditional weapon of Roman equipment – and therefore particularly suited to combat on horseback.

Another characteristic of Langobard spathae is their being particularly flexible and resistant, the result of a careful production process: damascening.

The technique consisted of alternating sheets of carburized steel with sheets of soft iron, which were twisted, beaten hot and shaped to form one or more bars, which were then riveted together and assembled to form the core of the blade. The two cuts or blades were machined separately and added to the core by welding to the mallet.

While forging and sharpening, a pattern progressively appeared in the central core of the blade, due to the difference in carbon content between the steel and iron strips and which could have a plurality of formal solutions: depending on the method of the process, the traces on the outer surface took on many different shapes and combinations and were particularly decorative: herringbone, waves, linear bands, and so on.

The ancient Germanic legends of the Edda tell of the skill of the blacksmith Weland:

“…he returned to the forge, chose a file and reduced the sword to fine filings which he then mixed with flour. He then made domesticated birds fast for three days and then fed them the mixture. Then he put the bird droppings into the furnace, melted them down so as to cleanse the iron of all its dross, and with the metal thus obtained he forged a new sword.”

The use of goose dung may have seemed like magic, but what the saga describes is an empirical process. By melting the iron filings contained in the nitrogen-rich guano, small quantities of steel were produced, which were essential in the process of damascening.

From the 7th century onwards, spathae became more and more luxurious. In addition to being damascened, they were decorated, embellished with gold handles and accompanied by wooden and leather scabbards adorned with precious metal elements.

One example is the beautiful spatha found in tomb 1 in Nocera Umbra (PG), one of the most valuable artefacts found in Langobard necropolises in Italy.

The double-edged blade is made of iron using the technique just described and consists of three parts, the two lateral cuts and the central damascened core. The handle is richly decorated in gold thanks to a combination of refined goldsmith’s techniques: filigree, made up of thin threads of precious metal, and cloisonné, a cellular process originally filled with glass paste or semi-precious stones, still visible in the surviving part of the scabbard’s mouth.

The object is distinguished by the presence of two rings – a symbol of the warrior’s loyalty to his lord, king or duke – woven in gold on the pommel of the sword.

Due to the preciousness of the materials and decoration, it is believed that the weapon was a parade object and that it was placed in the tomb of the deceased to show off his high social rank.

“The sword was in itself sacred, a sacredness confirmed both by epic sources and by Langobardic laws” (F. Cardini, “Alle radici della cavalleria medioevale”). So i was a great dishonour for grave robbers who dared to steal such a precious object from a dead person!