July 1904, the first public phone booth is installed in Spoleto

On 11 July, 1904 a public poster announces the onset of the public phone service in Spoleto. Scheduled connections include the city network and an inter-city link to Terni. The poster specifies that anyone wishing to subscribe or simply ask for information about the new technology can do so by showing up at the Lucini hotel in Piazza Mentana, then the most prestigious accommodation facility in the city. The poster is signed by Virgilio Alterocca, an entrepreneur from Terni, famous for having introduced the fashion for illustrated postcards and for his copious printing activities, a man of many interests who, towards the end of the 19th century, had already bet on the success of telephone communication, starting up one of the first Italian public telephone lines in Terni. 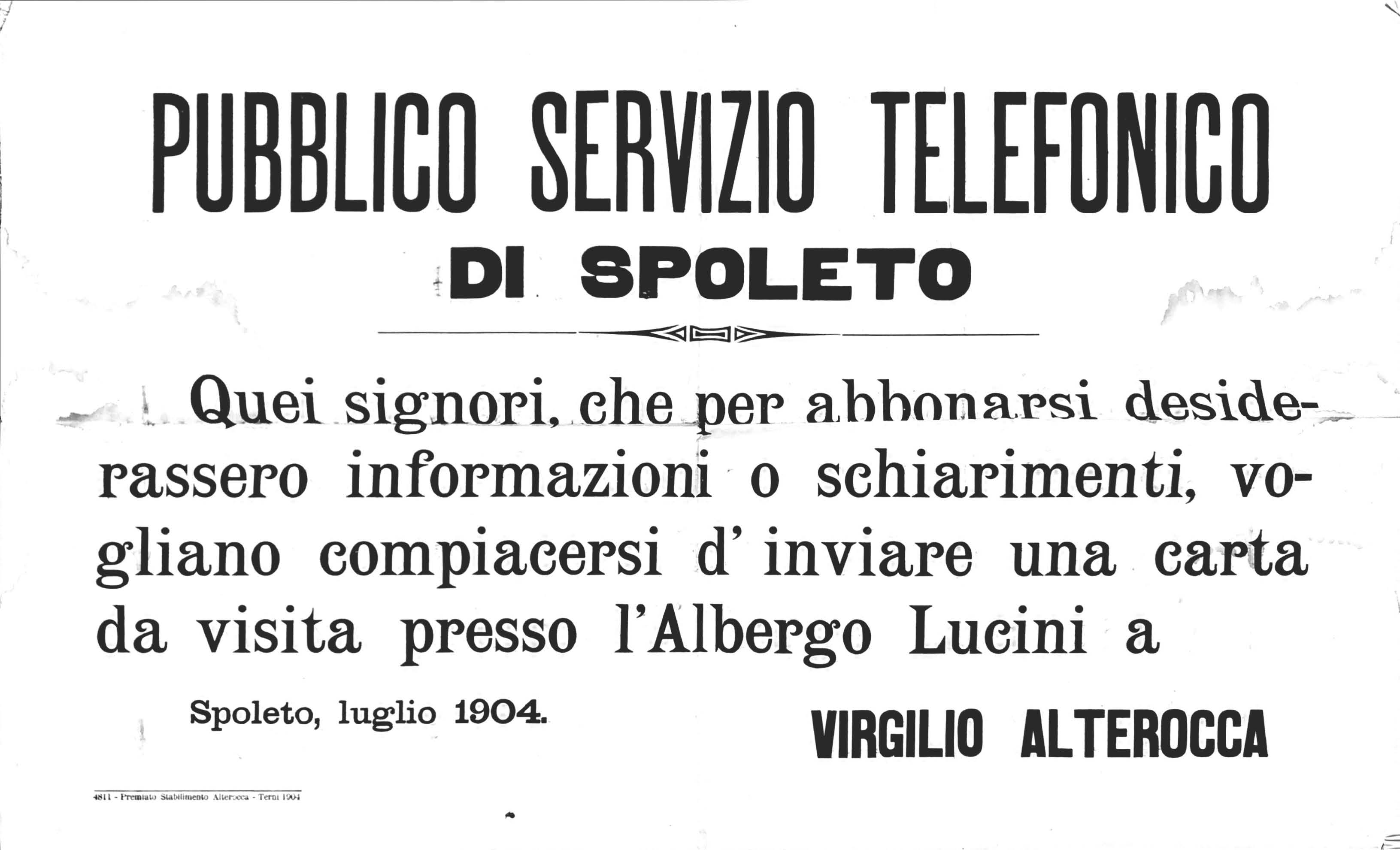 The news was greeted with great satisfaction. This is demonstrated by an article of 3 July of the same year which appeared on the socialist periodical “Giovane Umbria” in which the “modern means of communication of ideas” is hailed both as a technological panacea for overcoming Spoleto’s chronic isolation, and as a salvific safe-conduct towards modernity and the development of the territory, for which it would represent an immense advantage, “because if there is a city where it is necessary to tackle the disadvantages of an unfortunate situation and topographical structure, this city is Spoleto. Not only it is cut off from the centres and lines of trade, it is also so intrinsically disjointed by its steep slopes, that it is almost divided into two cities, two diffferent cores of collective life, having as centres Corso Vittorio Emanuele [today Corso Mazzini] and Corso Garibaldi, with little mutual exchange and relations. […] Just as the car for the time being helps dealing with the lack of a railway and the difficult road to the mountains, so the telephone will partly mitigate the effects of the climbs and descents within the city, and the secluded position of Spoleto in relation to Terni, Foligno, Norcia […] Anyone who knows the lightning speed of modern business contracts, and the nervous oscillation of prices, immediately understands what an advantage it will be to have such a powerful aid as the telephone […] It will be, in short, for our city a source of direct profits, whose full extent is not even possible to anticipate“.

The “Giovane Umbria” newspaper also devoted the entire front page of its 17 July issue to the technical, organisational and economic aspects of the agreement signed by the then Administration, led by mayor Domenico Arcangeli, with Virgilio Alterocca. A five-column article explains the complex bureaucratic reasons why the service was to be entrusted to a private company, rahter than being managed directly by the city, also adding that a favourable clause would enable the city to buy back the plant after five years. Particularly curious are the details of the costs of the service: “Subscriptions for a telephone post within the city cost 96 lire per year. […] 5-min phone conversation with Terni will cost 0.50 lire for everyone, subscriber or not. At the railway station, a free telephone post will be available to all subscribers“. 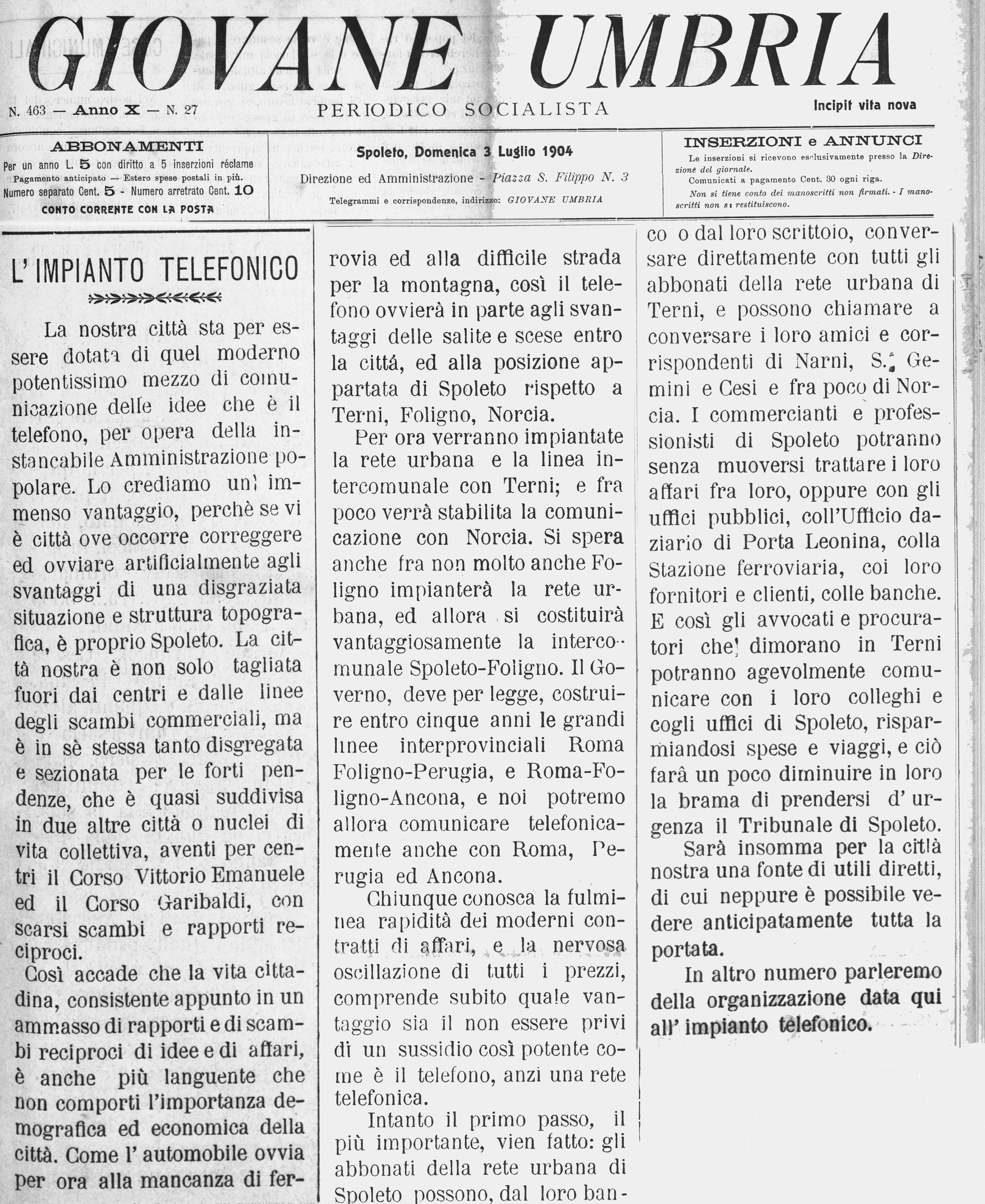 Years passed. In January, 1907, the city is ready to celebrate another major event, even more important than the first: the connection of Spoleto to the national telephone network. The ceremony is scheduled for Sunday 13 January at 11 a.m., in front of the city’s highest authorities. The first telephone conversation will be with Carlo Schanzer, Minister of Posts and Telegraphs under the Giolitti government, who, for the occasion, has granted free use of the public long-distance lines to Rome, Ancona and Perugia.

The newspapers of those days – the ‘Giovane Umbria’ of 31 December 1906 and 13 January 1907, ‘Il Messaggero’ of 10 January 1907 and a poster put up on 12 January 1907 by mayor Arcangeli – shed a retrospective light on the whole affair of the agreement with Alterocca of Terni. On that poster, Arcangeli wrote to the citizens of Spoleto that in a law of 1903 ‘[…] Spoleto was not included in the towns which had to have a public telephone box. This Administration, in order to prevent our city from being cut off from the new comfortable and rapid communications […] promptly provided for the construction of its own network and of a special line connecting with Terni, and therefore with the general network. So also in this case Spoleto owes it to its own efforts to have procured those advantages that the law did not grant it‘.

Both “Il Messaggero” and “Giovane Umbria” emphasised the fundamental role played by Minister Carlo Schanzer in the negotiations, a great friend of Spoleto, who a few years later would prove to be fundamental for the realisation of the great Spoleto-Norcia railway project.