14 August 1911: The premiere of ‘Biancofiore‘, a melodrama in three acts set in 15th century Florence, is held at the Teatro Nuovo in Spoleto, set to music by the Spoletan composer Alessandro Onofri, after whom our city’s Music and Dance School is named.

Onofri – whose paternal grandfather played a key role in the foundation of the Teatro Nuovo as city gonfalonier – was a young lawyer, born in Spoleto in 1874, whose unconditional love for art led him to musical composition and unregrettingly giving up his legal career. In the biographical notes in “Il Teatro Lirico Sperimentale di Spoleto nel suo primo ventennio“, Luigi Pompili tells us that Onofri was a pupil of Mascagni at the Scuola Nazionale di Musica in Rome where he graduated in 1904, and carried out part of his first activity as a musician in the United States, specifically as an organist in Boston. He returned almost immediately to Italy and began to devote himself seriously to composition.

In the Spoleto fortnightly Il Pensiero Radicale of 15 June 1905, Vincenzo Lucini interviewed Alessandro Onofri, mentioning for the first time that the young composer was working on his most ambitious project, an opera entitled Madonna Biancofiore, explaining its genesis and intentions:

«It is a dramatic action in a fourteenth-century setting – says Onofri – which I liked so much and which impressed me after reading the homonymous novella written by our mutual friend Alfredo Vanni, which Prof. Micacchi of Rieti and Checchino Spada [Spoletan librettist, editor’s note] put into poetry, in verses that I, modestly but with the intention of a very coveted attempt, will offer to the public and critics of god knows which theatre, clothed in music and melody […] The inventive part, including a prelude or an intermezzo, is already finished; I am now working feverishly on the instrumental part and it is a fever that does not tire me, but rather increases my enthusiasm and hope of succeeding.»

However, a five-year period would elapse, before the opera could meet its audience. Before debuting in Spoleto, Onofri’s opera had had its Italian premiere at the prestigious Teatro Rossini in Venice on 3 March 1910. 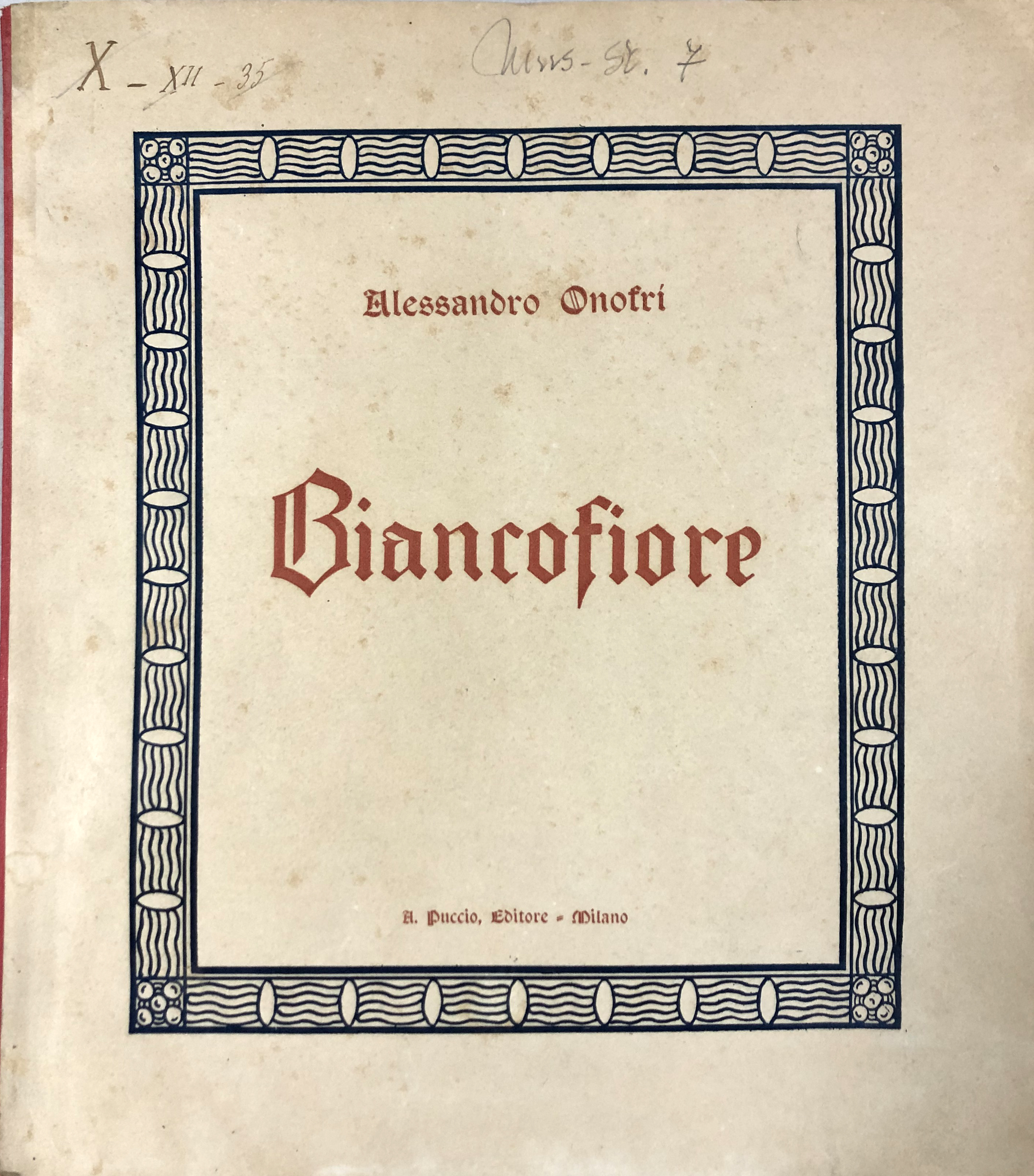 This is revealed on the frontispiece of the publication of the transcription for voice and piano by Puccio Editore. In addition to the score of Biancofiore, the Carducci library also holds the opera’s libretto, printed in Venice in the same year, enriched by Onofri’s autograph dedication. The Carducci library also holds two typescript versions of the libretto and the musical manuscript of another work by Onofri, Fantasia Pagana. 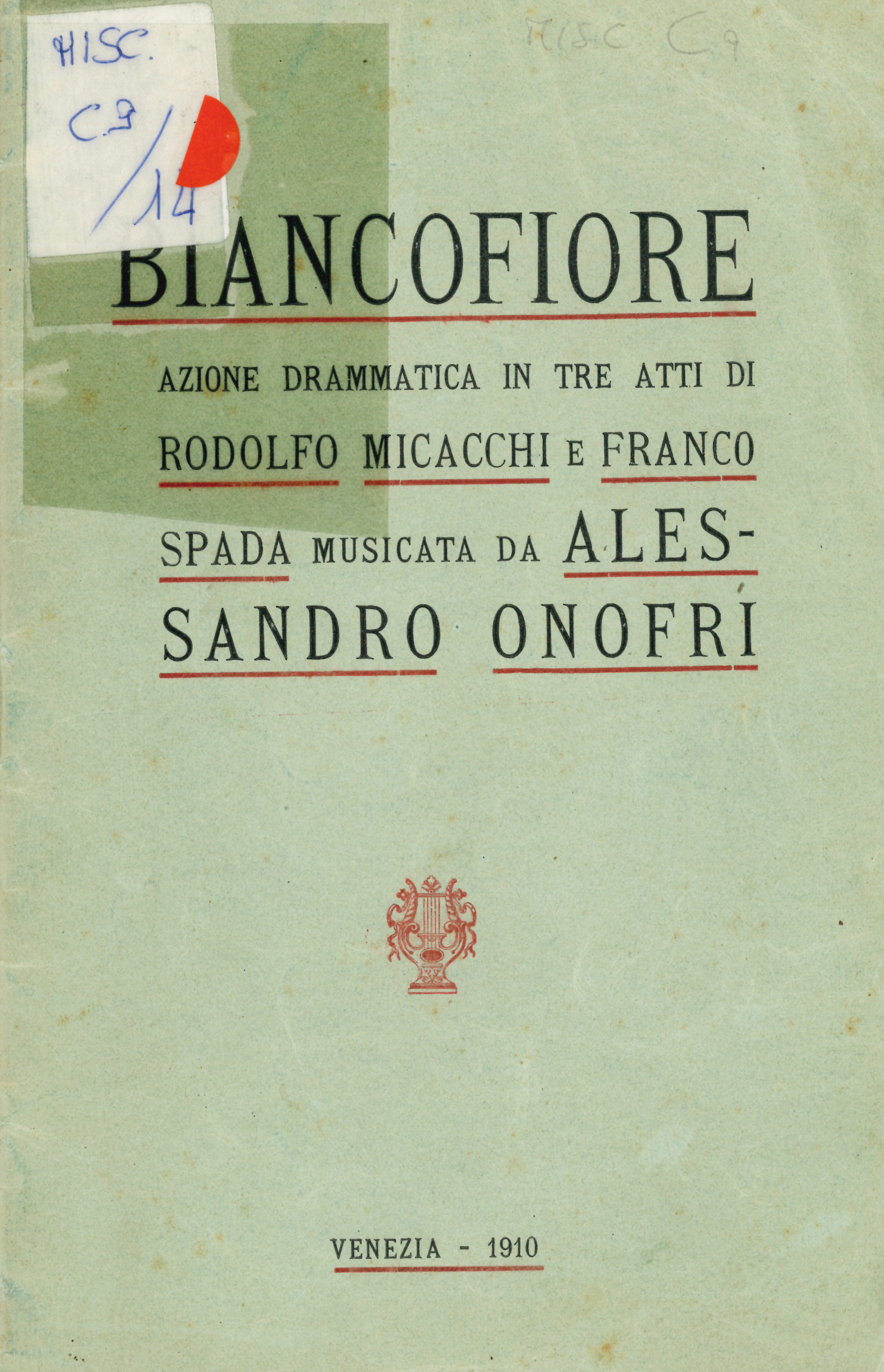 The soirée in Spoleto at the Teatro Nuovo, on the occasion of the Opera Season, was a triumph. The local press (“Il Pensiero Radicale“, the “Messaggero“, the “Giovane Umbria“) dedicated considerable space and several column to the event, in special pages by the very emphatic tones.

Nine performances ensued until 27 August, as the various posters of the time announced. The pride taken in the genius loci results in high acclaim in the reviews by the Spoletan newspapers, decidedly declamatory and also praising Giulio Falconi’s conduction and the interpretation of the soprano Carmen Toschi in the eponymous role. The opera’s good reception was also confirmed by the positive response of the national specialised press. 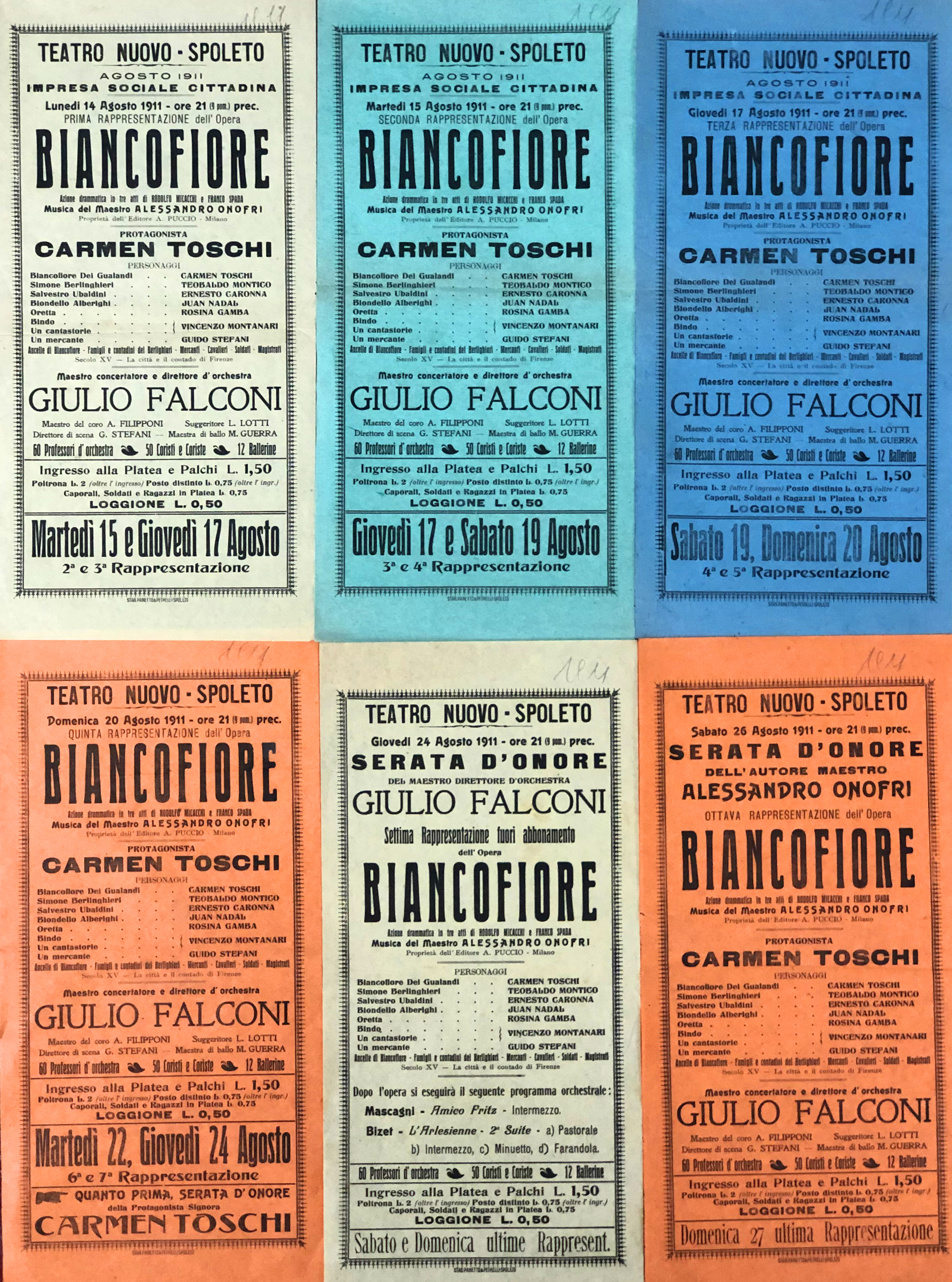 Onofri’s later musical production woulds not be met with similar acclaim. The failure of two consecutive operettas apparently pushed him towards different albeit eclectic expressive paths, under the banner of an intellectual curiosity that was never satisfied. He returned to Spoleto in 1924 to conduct Umberto Giordano’s “Andrea Chenier”, but devoted himself less and less to music, first turning to antiques, then the activity of impresario, literature (in 1926 he wrote the novel “Quando sarà vita“) and finally biology and medicine studies.

Onofri was a peculiar figure, whom Luigi Pompili, in the cited volume, remembers fondly, like when he tells us about Onofri’s last years and how his 1932 death in Varese caught him when still young; Onofri died of a heart attack while “working in a nursing home” and “preparing to graduate [in medicine] while at the same time resuming his musical composition“.

Onofri left an unfinished trilogy, for which he only completed “Fantasie Pagane” and “Fantasie Cristiane“.